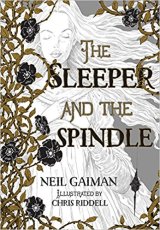 The Sleeper and the Spindle by Neil Gaiman is a unique twist on the Sleeping Beauty story.  Sleeping Beauty and the people in her castle have been asleep for years. However, this sleeping sickness seems to be spreading. First, the nearby villages fall asleep, then the villages near them, and so on. Soon, the entire kingdom is asleep, and it’s up to three dwarfs and the queen of the neighboring kingdom to figure out how to put an end to the curse.

This story has an ingenious blend of fairy tales. For instance, the queen is a character from another story. I’ll just say that she is someone who has also been asleep for a long time and let you figure out who she is. There are also additional elements to the story that help flesh it out. Those who are asleep do more than sleep, an old woman who is trapped inside the castle and immune to the curse, and the more one delves into the story, the more it becomes apparent that the details of the Sleeping Beauty that appear in each retelling are not what they seem. Not to mention that the ending will leave you thinking, “Wait, what? What just happened?” Overall, this is a quick read that goes more in-depth than one would think the amount of pages would allow.

Setting: A fairy tale land in an unspecified historical era.

Objectionable content? A small amount of violence, one death, an occasional corpse, and unsettling factors (i.e. the sleepers)

Can children read this? Yes, as long as they are not easily upset by unsettling elements in stories. However, this book is best for teenagers and adults.

Themes: Beauty, power, loss, choices, strong women, and the need to control other’s emotions vs. the strength of only feeling your emotions.

Good to have a backup plan.
This week the Cheshire Public Library has five new bestsellers, 94 new movies, three new music CDs, 112 new children's books, and 25 other new books, including ten that are available online. New items include "Good-Bye Stacey, Good-Bye", "InvestiGators: Ants in Our P.A.N.T.S.", and "Karen's School Picture". #newbooks #newdvds #comingsoon #librarybooks #wowbrary #librariesofinstagram
Martin Luther King, Jr. and the struggle for civil rights are featured in our lobby right now.
It’s #bookfacefriday again!
We’ve set up a selection of #LibraryReads Hall of Fame authors for your browsing pleasure!
A sight we never tire of.
New nonfiction in the Children’s Room!
Swipe through to see the most popular books at Cheshire Library in 2021 - how many have you read?
Now is the winter of our discontent…