No, I won’t bore you with flu information. Let’s talk about something more deadly. 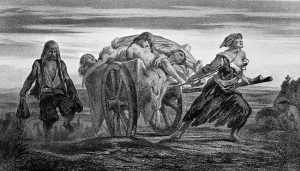 There have been a LOT of deadly epidemics throughout history. AIDS/HIV has killed 36 million people since 1981, a virus with a 99.9% fatality rate, though after billions of dollars we’re down to “only” 1.6 million deaths per year, world-wide. The 1918 flu epidemic (the same flu you get a shot for, H1N1) killed 20-50 million people in less than two years. The Black Death, that 1346 wave of flea-borne bubonic plague, killed 200 million. Plague, carried in the US by squirrels and prairie dogs, still kills 100 people a year. Another mega-epidemic was the Plague of Justinian in 541, which coincided with a major volcanic eruption – some believe it was an earlier explosion of the famous Krakatoa – and a year with crazy weather and an abundance of misery, killed 50 million. It’s also believed to have been Bubonic Plague. The plague of Antonine in 165 AD, brought back by Roman soldiers, killed 25 million people and might have been either Measles or Smallpox. The entire population of New England plus New York State is 30 million.

In the case of viruses – HIV, Smallpox, Measles, Flu – those numbers were due to germs

released on a population that had little to no immunity. Measles has been around for millennia, but viruses mutate. Mutations are accidents during reproduction – like the first case of left-handedness, or blue eyes. Viruses can reproduce rapidly inside a cell; if they multiply every 20 minutes, and if you expect one accident every 1,000 generations, that’s 1600 mutations every eight hours. Some mutations can render a virus or bacteria weaker. But sometimes, they become more dangerous. 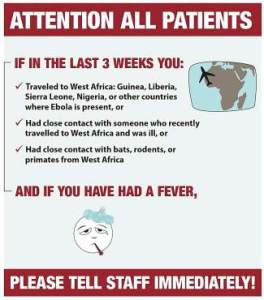 I don’t know why, but I’ve read almost every book by anyone who’s worked on Ebola. The Hot Zone is one of my favorites. So of course, along comes Richard Preston and writes another book on the most recent outbreak of Ebola, a disease that, untreated, has a 90% fatality rate, and a 40% rate if treated with supportive care (let’s not forget, Smallpox had a 30% fatality rate. Yeah, maybe before your time, but that’s why there was such a forced vaccine campaign to eradicate it.) Ebola is extremely contagious – just one particle, out of the billions spewed by each victim, can be deadly.

In his new book, Crisis in the Red Zone, Preston begins with the 1976 outbreak,  then

covers the 2014 outbreak, so you can see just how far medicine has come in those 40 years, from reusing the same needle without sterilizing it to PCR breakdown of the genetic code of Ebola. Six strains have been identified; the new one, Ebola Makona, is four times more deadly, the result of just one mutation swapping one single amino acid.

Why should Ebola bother you? As Preston reiterates time and time again, if the countries where Ebola is endemic cannot handle an outbreak, imagine Ebola getting loose on a subway in New York, by a person who gets off in Grand Central, and then walks to a play on Broadway, even though they’re feeling a bit feverish and coughing. They’ve now infected several thousand people, who will infect several thousand people, who will get on planes and fly around the world, spreading the virus very rapidly, to major cities with crowded airports. The risk is entirely too real, on medical systems not the least bit prepared to handle it – there are barely 400 Level-4 isolation beds in the ENTIRE US. (And yes, in the last epidemic, Ebola DID make it to the US, all the way to Texas, where it killed two people. )

However, there is now hope – ZMapp was the first antibody-driven treatment for Ebola, taking a victim literally in the process of their last breaths to walking around *in one hour*.  And yet, two new drugs with the unimaginative names of REGN-EB3 and mAB114 were found to be better – bringing a death rate of 90% to a survival rate of 90%. There has also been the creation of an Ebola vaccine, which is 97% effective. Preston chronicles the moral and ethical dilemma of these developments – you cannot have trials in people because of the fatality rate of the disease, and in giving an unknown treatment to people who already have a 50% chance of living, you may kill them with the “cure”. How do you give informed consent when no one knows what the drug will do? And who do you choose to give a possible cure to?

Read the book. It’s got all the angst of a good murder mystery, the joys of survival, and medical miracles on top. If you live on Earth or do business here, you really need to be aware of these things.

Wash your hands and check out some of these other awesome books on viruses!