Sometime ago in the mists of the last century, there were only three TV networks. On holidays, you usually had the choice of a football game, a different football game, or the longest movies the network could find – usually Chitty Chitty Bang Bang and The Sound of Music.  Chitty, an overly technicolor musical, scared the daylights out of me. As soon as that Childcatcher came prowling, I was behind the sofa holding my breath. Today’s kids would just send his photo to Instagram and beat him up.

Children see things differently. Some are easily spooked, some are skeptical from birth. Kids misunderstand and misinterpret things, and that alone can create unfounded horror.

Obviously, most children’s films try to avoid horror, but what’s marketed to kids is not

Young Sherlock Holmes (the food nightmare) scarred one of my children; to this day she 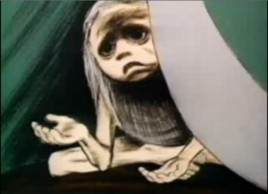 won’t eat cream puffs. Tim Burton’s Mars Attacks! and its disembodied heads was another. Another didn’t trust Nazgûl (nor should you), and was terrified by Matilda. The 1971 Alastair Sim animated A Christmas Carol, with its writhing starving waifs and the faceless, voiceless Ghost of Christmas Future taints every incarnation I’ve seen since.

If your child likes spooky things and wants to be a part of the Addams family, here’s a list of kid’s films – honest! – that just might give your kid the shivers. If you have a child with a more sensitive nature, you might want to wait a few years on these:

Toy Story – Oh, doll-headed spider and hook-bodied Barbie, how we hate you! You may

be Pixar, but you’re scary!

Labyrinth – Sure, we adore Bowie, but these are Muppets who steal babies, chase girls with drill bits with intent to kill, and drop people into pits lined with talking disembodied hands. ‘Nuff said. 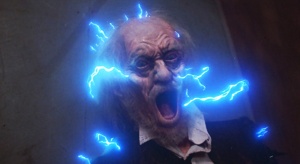 Something Wicked This Way Comes – Disney likes to whistle and pretend this isn’t theirs, but Ray Bradbury didn’t edit the scariness out of his novel of two boys and an evil carnival run by Mr. Dark, complete with electrocutions and freakshow.

Who Framed Roger Rabbit – But this is a comedy! you cry – and it is, until crying Toons get faced with The Dip. Be prepared for a talk on death.

Return to Oz – if the flying monkeys didn’t scare you, perhaps Dorothy’s electroshock treatments will.

Jumanji – sure, it’s a game, but a deadly one. Floors that swallow people are just some of the issues; the intensity and situations may be too much entirely for young viewers.

Harry Potter series – yes, the first one is a charming tale of an orphan boy who learns he’s a wizard, but the stories get darker, and major beloved characters start dying. By the third film, Voldemort is embodied evil and believably out to get Muggles. Like your child.

The Dark Crystal – Fraggle Rock it’s not. It’s a dark Muppet film with lots of dark themes. Preteens maybe, but there’s no Elmo to lighten it for the little kids.

Gremlins – another movie made before PG-13, so it was stuck with PG. Gremlins are

cute little things until you feed them, and then they become psychopathic demons out to harm and kill.  If preteen horror films was a separate genre, this would be one of their cornerstones, along with perhaps The Witches, Watcher in the Woods, and Jaws (which is also only PG).

Willy Wonka and the Chocolate Factory – let’s face it, Roald Dahl is almost never nice to children. Here alone, he sucks them up pipes, dumps them down garbage chutes, and has them cornered by very scary men in dark alleys asking them to sell their souls for money. But the crowning touch cited by many critics is the boat ride  scene, all psychedelic and threatening – but that’s the way it is in the book, too – a disorienting journey where everyone believes Wonka’s looney.

Every parent knows their child best. Some kids like a scary movie, some kids will wind up sleeping in your bed for a week with all the lights on. If your kid shows interest in scary movies, these might be a gentler introduction over, say, The Exorcist. Just be aware that even a seemingly wholesome, kid-marketed movie can have some really scary moments when you least expect it.

One thought on “Childhood Horrors”