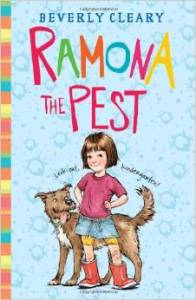 If you grew up in the 70’s and 80’s, you probably read at least one of the Ramona Quimby books by Beverly Cleary. Cleary documents inquisitive, quirky Ramona from the age of four upward, and how her innocent rationales confound and vex her parents, sister, and just about everyone she meets. Cutting her own hair, baking her doll inside a birthday cake, fighting with her sister, starting school – stories every child or parent can relate to with much laughter.

Fast forward a generation. Ramona gives way to Junie B. Jones, a kindergartener of the modern age whose misinterpretations and misguided notions get her into just as much trouble as Ramona, at home and in school. But while Ramona is filled with the sweet innocence of a bygone era, Junie is modern empowered sass. Whether getting into trouble on the schoolbus or with her family or with her nemesis, That May, Junie says aloud 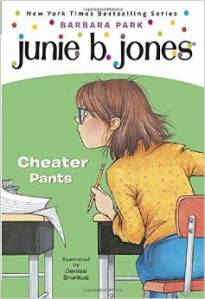 what many children and adults often think.

Myself, I’ll take Ramona over Junie B, simply because Junie is a little too fresh for me, but I confess: I love the Junie B. Jones books, and sneak off to read them even though my youngest is now 17. And yes, I would have no problem rereading a Ramona book if I had an hour to kill – I have the whole set. If you love the genre but won’t read a kid’s book, there is hope: if you miss those kinds of stories, of seeing the world through a child’s eyes as they struggle to make sense of the world around them, often hilariously misinterpreting things, fear not! The adult form of those stories exists. 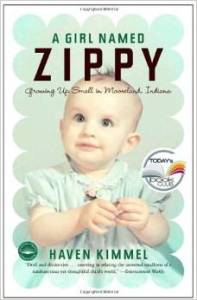 Enter Haven Kimmel, who grew up in the tiny town of Mooreland, Indiana, in the 1970’s (population 300). Kimmel is a real life Ramona Quimby, and she chronicles her life in a book called A Girl Named Zippy. How she sees things, both odd and oh-so-totally familiar (“A Short List of Records My Father Threatened to Break Over my Head If I Played Them One More Time” “A Short List of Things My Father Won Gambling” “The Breakfast Bar at Which No Breakfast Was Ever Eaten.”), will have you laughing out loud where ever you happen to be reading at the time. Her cast of crazy characters, both friends and family, are common to almost every family, whether they admit them or not. Her father works in a factory, her mother lies on the couch watching TV ignoring any and all household chores, and there’s nothing in the house to eat but carrots. Although Kimmel never has clean clothes (people she visits tend to wash her clothes for her when she stops by), only one room has heat, and the house is falling down around them, Kimmel never feels neglected. She hates her Quaker roots and three-times-a-week church, her mother’s best friend has the mouth of a sailor (I can’t help but see Kathy Bates playing her in a movie), and her brother and sister flee home at the first opportunity. 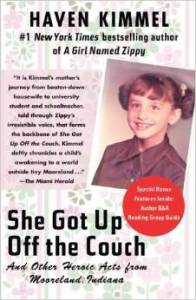 In her second book, She Got Up Off the Couch, Kimmel describes her later years when her mother got some gumption, got off the couch, and decided to enroll at Ball State University – though it only made the home conditions worse, if possible. While being on campus with her mother, attending theater, even just listening to her mother’s phone conversations, Kimmel is suddenly thrust into realizing there’s a world beyond Mooreland, and she is never the same again. Things are not always fun and games, and Kimmel starts to become aware of the differences of how she lives versus how other people live (her father’s friend has gold toilets and velvet wallpaper; they have a hole in their wall that goes almost to the outside, and no running water), and begins to notice her parents are never together. Eventually she catches on to the fact her father’s having an affair, but even then Kimmel’s tone is wistful and both painfully accusatory and forgiving at the same time.

Whether you grew up in the 60’s, 70’s, or 90’s, the fact that you grew up at all gives you a common experience shared by everyone else, oftentimes more than you know. If you can’t relate directly to Kimmel, you probably knew someone in your neighborhood just like her. Whether you grew up in Indiana, Oregon, Arizona, or Massachusetts, you will find delight and painful familiarity in Kimmel’s youthful innocence (“She picked out a wig to wear on the special day, too, a style and color she considered “subtle’ and which I thought said ‘Pekingese.’”), while your children laugh knowingly at Junie and Ramona. It is the same story, different audiences.