When All the Girls Have Gone
When Charlotte Sawyer is unable to contact her step-sister, Jocelyn, to tell her that one her closest friends was found dead, she discovers that Jocelyn has vanished. In a desperate effort to find her, Charlotte joins forces with Max Cutler, a struggling PI who recently moved to Seattle after his previous career as a criminal profiler went down in flames–literally.

She uses Amanda Quick for her novels of historical romantic-suspense. 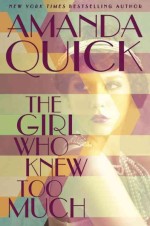 The Girl Who Knew Too Much
In 1930’s Hollywood, rookie reporter Irene Glasson (who found her previous employer murdered) discovers the body of an actress at the bottom of a California hotel pool. She investigates and finds herself drawn to Oliver Ward, a former magician. As the mystery deepens and more women die by drowning, Irene struggles to keep her own past a secret while she and Oliver hunt for the killer.

Jayne Castle (her birth name) is reserved for her stories of futuristic/paranormal romantic-suspense.

Illusion Town
Hannah West isn’t the first woman to wake up in Illusion Town married to a man she barely knows, but she has no memory of the ceremony at all. For that matter, neither does Elias Coopersmith, her new husband. All either of them can remember is that they were on the run. The coolly competent mining heir arouses her curiosity and interest. And even her dust bunny likes him! Set on the planet of Harmony in the future.

“I am often asked why I use a variety of pen names,” Krentz says.  “The answer is that this way readers always know which of my three worlds they will be entering when they pick up one of my books.”

Krentz’s three worlds often intermingle. Her Arcane Society series, books about men and women with paranormal power, spans all three of her worlds. Second Sight, written under the Amanda Quick pen name,  takes place in Victorian England at a time when the very old, very secret Arcane Society is about to run head-first into the 20th century. Flash forward to Jayne Ann Krentz’s White Lies, a tale of the Arcane Society in the 21st century. And then jump all the way to Jayne Castle’s Midnight Crystal, an Arcane society novel that takes place on the planet Harmony in the future. Characters from the novels that take place in the past are often referenced in the modern-day stories and the futuristic tales.

Not all her novels involve the paranormal. Many of her contemporary romance novels are stories of suspense in which the main characters must unravel a mystery that usually involves tracking down a killer.  Secret Sisters, River Road and Trust No One are three recently published works that fall into this category.