Life has a way of getting in the way, and I’ve had to cut back on my reading.  I used to finish a book even if I didn’t like it.  But now, if it doesn’t draw me in after the first two chapters, it goes back to the library.  It’s been awhile since I’ve finished a book.  But, finally, I actually finished two in a row!  Not only finished, but I actually finished each one in a day!  On two beautiful Sunday afternoons, I sat and read, and read, and read.  It was wonderful!

The first one was J.D. Robb’s Apprentice in Death.  If you’ve been a fan of Nora Roberts/J.D. Robb, you probably noticed that her last several books were, well……different.  Some say she has a ghost writer (which she vehemently denies), others say writer’s block, and others say she’s just spreading her wings and trying something new.  Apprentice in Death is more in line with her earlier writings and I was hooked in the first chapter.  There is a subtle difference.  In the earlier In Death books, Ms. Robb spent a lot of time writing about the actual killings in very graphic detail.  In Apprentice, she spends her time inside the characters’ heads and their lives.   I love how Roarke and Eve have ‘grown up’.  There is a quiet maturity about them, but they still sizzle and crackle.  All the supporting characters are back and a few new ones have been introduced, giving hope that future books will be as entertaining as this.  This is my favorite book of the In Death series.

“The shots came quickly, silently, and with deadly accuracy. Within seconds, three people were dead at Central Park’s ice skating rink. The victims: a talented young skater, a doctor, and a teacher. As random as random can be. Eve Dallas has seen a lot of killers during her time with the NYPSD, but never one like this. After reviewing security videos, it becomes clear that the victims were killed by a sniper firing a tactical laser rifle, who could have been miles away when the trigger was pulled. And though the locations where the shooter could have set up seem endless, the list of people with that particular skill set is finite: police, military, professional killer. Eve’s husband, Roarke, has unlimited resources–and genius–at his disposal. And when his computer program leads Eve to the location of the sniper, she learns a shocking fact: There were two–one older,one younger. Someone is being trained by an expert in the science of killing, and they have an agenda. Central Park was just a warm-up. And as another sniper attack shakes the city to its core, Eve realizes that though we’re all shaped by the people around us, there are those who are just born evil.” 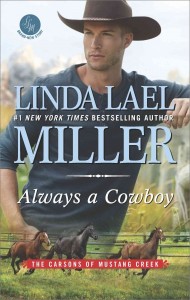 The second book I finished was Always A Cowboy (The Carsons of Mustang Creek) by Linda Lael Miller.  This is book two of a trilogy.  Ms. Miller has been writing about cowboys for a very long time.  You think she couldn’t possibly write something new and different, but she proves over and over that she can!  Again, I was hooked in the first chapter.  This is a gentle romance with just the right amount of spice and it gives us a good look into modern life in the American West.  Ms. Miller has a way of making her characters come to life and the settings are rich with details.  The story moves along quickly and there is an eclectic assortment of secondary characters that adds a richness to the story.

This book has an added bonus.  At the end of the book, Ms. Miller wrote a very personal essay giving us a glimpse into her life.  Ms. Miller is one of those authors who shares a lot about herself.  She has a wonderful website with news, a blog, and contests.  Check it out here.

Drake Carson is the quintessential cowboy. In charge of the family ranch, he knows the realities of this life, its pleasures and heartbreaks. Lately, managing the wild stallions on his property is wearing him down. When an interfering so-called expert arrives and starts offering her opinion, Drake is wary, but he can’t deny the longing—and the challenge—she stirs in him.

Luce Hale is researching how wild horses interact with ranch animals—and with ranchers. The Carson matriarch invites her to stay with the family, which guarantees frequent encounters with Drake, her ruggedly handsome and decidedly unwelcoming son. Luce and Drake are at odds from the very beginning, especially when it comes to the rogue stallion who’s stealing the ranch mares. But when Drake believes Luce is in danger, that changes everything—for both of them.

Book one in this trilogy is Once A Rancher.  It too, was an outstanding read.  “ Offering a troubled boy a job on the ranch he shares with his younger siblings, Wyoming businessman Slater Carson falls for the youth’s beautiful guardian, Grace, a resort manager whose busy life is threatened by dangers from her past.”