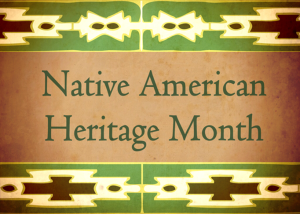 What started at the turn of the century as an effort to gain a day of recognition for the significant contributions the first Americans made to the establishment and growth of the United States, resulted in President George Bush approving a joint resolution in 1990 designating the whole month of November as Native American Heritage Month.  These original inhabitants of the United States deserve to be honored for their contributions, achievements, sacrifices, and cultural and historical legacies.

The first evidence showing indigenous people to inhabit North America indicates that they migrated here from Siberia over 11,000 years ago. They prospered until around the 15th century when Europeans first arrived.  History was not kind to the Native Americans from that point on.  Today they account only for 1.4 percent of the population and live on designated Indian reservations that are described as ‘third world country’ conditions.  It wasn’t until The 1924 Citizenship Act, that all Native Americans were finally granted U.S. citizenship.

Some of the contributions from Native Americans include:

The library has a wide variety of materials on Native Americans.  Since the Cheshire  schools study the history of Native Americans, our Children’s Department has an extensive collection of books on the subject for check-out.  The Librarian at the Children’s Desk can direct you in locating these materials.

For the adults, here’s a sample of some of the titles you can find at the library.

– A United States historian, author, professor and community activist, presents a meticulously researched history of Native Americans after the first European contact, exploring these peoples from coast to coast and giving them a chance to tell their own broad story.

Connecticut’s Indigenous People: what archaeology, history, and oral traditions teach us about their communities and cultures – A groundbreaking volume on the rich 13,000-plus-year history and culture of Connecticut’s indigenous peoples.

Custer’s Trials: a life on the frontier of a new America – A biography of the iconic Civil War commander examines his contributions to politics and the Industrial Revolution, sharing insights into his turbulent relationships, perspectives on Native Americans, and conflicts with the military.

A History of the Indians of the United States-

Traces the history of the American Indians as a distinct social and cultural group in the United States, providing the basis for a critical reappraisal of government Indian policy.

Winds of Freedom: the story of the Navajo Code Talkers of World War II – Margaret Bixler

Toward the Setting Sun: John Ross, the Cherokees, and the trail of tears – Brian Hicks – Documents the story of a first white man to champion the Native American cause, describing his four-decade chieftainship throughout a turbulent period of racism, western expansion and broken treaties.

The Dying Grass: a novel of the Nez Pierce war

(Fiction) – Diane Glancy – Chronicled through the diverse voices of the Cherokee, white soldiers, evangelists, leaders, and others, a historical novel captures the devastating uprooting of the Cherokee from their lands in 1838 and their forced march westward.

Caleb’s Crossing (Fiction) – Geraldine Brooks – Forging a deep friendship with a Wampanoag chieftain’s son on the Great Harbor settlement where her minister father is working to convert the tribe, Bethia follows his subsequent ivy league education and efforts to bridge cultures among the colonial elite.

Runner (Fiction) – Thomas Perry – Native American guide Jane Whitefield returns from retirement to the world of the runner determined to hide a young pregnant girl who has been tracked across the country by a team of hired hunters.

Bury My Heart at Wounded Knee

(DVD) – Fictionalized account of the forced annexation and assimilation of Native Americans in the nineteenth century West.

For Romance readers, two authors have concentrated their writings on the American West – Cassie Edwards and Leigh Greenwood.  Click on their name for a list of titles.

For those who like to read Western Fiction, we have a great assortment from these three authors – William Johnstone, Elmer Kelton, and Zane Grey.  Click on their names for a list of titles.

On a personal note, it’s rare to find a New Englander who doesn’t embrace Colonial decor, but I don’t.  I think in a past life, I must have resided in the old American West!   I love contemporary decor with Southwest touches.  I was fortunate enough to visit the Southwest and bought home a few souvenirs.  (Can you spot the four snowmen I forgot to remove from the display?) 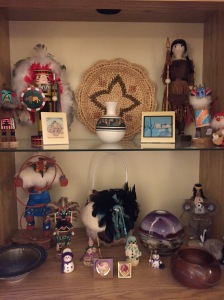 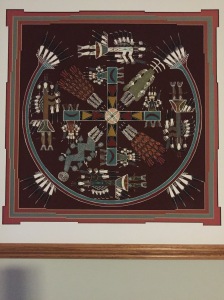