Now what, I can hear you asking, does Winnie-the-Pooh have to do with tranquility, philosophy, and Taoism? The answers are revealed in Benjamin Hoff‘s The Tao of Pooh, a book of 158 pages that deftly explains the principles of Taoism and applies them to modern life using the seemingly-odd, but, ultimately, not-so-odd example of Winnie-the-Pooh.

Using excerpts from the Pooh books by A.A. Milne, Hoff makes Taoism approachable and easy to understand. It’s not just a deep Eastern philosophy for hermits and mystics!  The tenets of Taoism can be incorporated into everyday life as Hoff illustrates via Pooh, a bear who exists very much in the now.

“When you discard arrogance, complexity, and a few other things that get in the way, sooner or later you will discover that simple, childlike, and mysterious secret…: Life is Fun.”

And what are the lessons of Taoism?

Things Are As They Are.
Everything has its own Inner Nature.
Enjoy the Process.
Things just happen in the right way, at the right time. At least they do when you let them.

And so much more. This is a perfect  read when you need some tranquility, perfect for 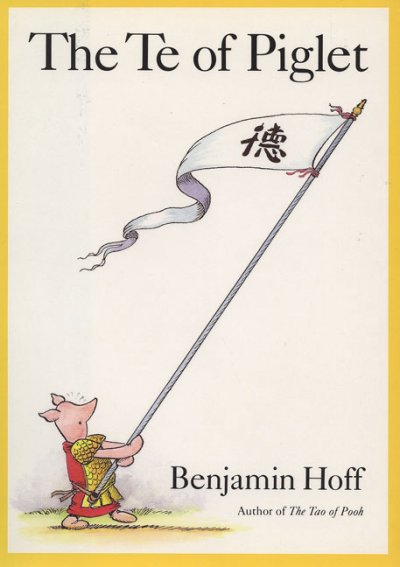 those desiring some calmness, slowness, some quiet. And the book is fun. It reads easily, quickly, with humor, wit, and quotes from Milne’s beloved stories. It can’t miss and it doesn’t miss.

By the way, Pooh Day is January 18th (also the birthday of A.A. Milne). What better way to celebrate than by reading the Tao of Pooh and it’s companion book, The Te Of Piglet.

Date night!
James is digging into an Eric Carle book this weekend, what are you reading?
This week the Cheshire Public Library has 30 new bestsellers, three new movies, two new music CDs, five new children's books, and 182 other new books, including 12 that are available online. New items include "Enough Already: Learning to Love the Way I Am Today", "The Maid: A Novel", and "Vegan, at Times: 120+ Recipes for Every Day or Every So Often". #newbooks #comingsoon #wowbrary #librarybooks #librariesofinstagram
R.I.P. Meat Loaf.
Today’s #bookface is light as a feather.
We’ve pulled the best of the best Children’s books from 2021 and put them on display for easy browsing. These books all received glowing reviews from professional journals in 2021, check out the display in the Children’s Room!
Want to get more reading done this year? We’ve got some tips for you! Swipe through to see them all.
New Fiction books on our shelves this month! See something you like? Place a request through our online catalog and we’ll put it aside and notify you when it’s ready to pick up.
Cheshire Library is closed January 17 in observance of Martin Luther King, Jr. Day.