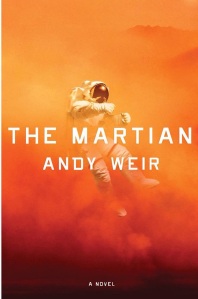 All I can say is

I have not read a book this gripping in ages. Oh, sure, I adore the Retribution Falls series by Chris Wooding, they are delightful and make my heart sing, but in The Martian, Andy Weir has managed to catch me in my weakest spot, a tale that feeds both my need for a good imagine-if story and lovingly nerdy details that set my non-fiction scientific brain on fire. I got to the end, and I wanted to read it all over again.

Very rarely do I seek a book out. They just happen to come to me in weird ways and tickle my interest enough that I open the cover (and covers are so VERY important. If it wasn’t for the fantastic artwork on the original Dragonlance books, I never would have entered a world that kept me trapped for more than ten years and ultimately sent to me to Lord of the Rings, which, really, is the Great-Granddaddy of the genre anyway). This time, I saw the trailer for the upcoming movie version of The Martian (release date: October 2, 2015), and was intrigued enough that when the book passed through my hands, I grabbed it.

Mark Watney is a crewman on the third manned mission to Mars. When a dust storm hits the crew on their way back to the lander, a piece of equipment snaps off and skewers his spacesuit, sending him reeling down a dune. His crew searches, but can’t locate him in the storm. His vital signs aren’t registering, and they all saw him toothpicked by that antenna. At the last possible second, they admit to themselves he’s dead and blast off to the mother ship while they can. 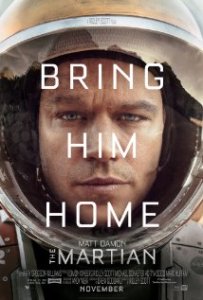 The story revolves around Watney’s ability to survive the impossible, figuring things out as he goes, making everything out of the most basic substances, James T. Kirk channeling MacGyver. Because the supplies left behind were meant for six and he’s only one, he’s able to piece things along using his own ingenuity until NASA realizes he’s still alive. They try and mount a rescue mission, but NASA being NASA and twisted up in bureaucracy and safety margins, not everything is going to go by plan. The chances of Watney making it or not remain 50-50 right up until the final pages. This is a book that will make you sneak off every possible second to read just one more paragraph. From the first page, it will grab you and never let you go. By the end, you’re going to be looking around your house to see if you, too, have anything that can free oxygen or create water, and you will never look at potatoes the same way.

Knowing that in the film Matt Damon has the lead role of Watney makes you read the story in his voice. He is a brilliant piece of casting; the book seems written for him and he will be utterly convincing in the role. Check out the trailer here:  https://www.youtube.com/watch?v=Ue4PCI0NamI . Ridley Scott (Alien, Blade Runner, Thelma and Louise) is directing, and he is certainly adept at handling suspense. I’m waiting to see what they do with the soundtrack, since it’s a running joke through the book that the only music that was left behind is disco (can you imagine being stuck somewhere for months or years with nothing but a few tracks of disco to listen to? I love the Saturday Night Fever album, and I do love ABBA, but not for weeks on end!).

You don’t have to know science to enjoy the book. You don’t even have to know your Phobos from your Deimos. You just have to love a good pressure-cooker story. Don’t let this one skip your orbit.

Andy Weir, I love you.