Our sci-fi-guy, Harold Kramer, has some authors to recommend: 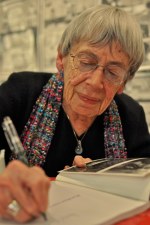 The world of science fiction and fantasy lost two of its best writers in recent years: Ursula K. Le Guin and Vonda McIntyre. Ursula K. Le Guin, who I consider one of the greatest science fiction and fantasy writers of the 20th century, died in 2018. She published over twenty-two novels, children’s books, and volumes of poetry and essays. Her works received many awards, including the Hugo, Nebula, and National Book Award.

Her novels centered around two main themes: gender and political systems. Her 1969 novel, The Left Hand of Darkness is about the effect of gender on culture and society,  It won both the Hugo and Nebula Awards for Best Novel.  An example of novel based on political themes is The Dispossessed: An Ambiguous Utopia, also a winner of both a Hugo and a Nebula Award.  It is about two planets orbiting next to each other – that have almost no contact between them and that have totally different economic and political systems – and the scientist who tries to unite the two worlds. I recently re-read The Dispossessed and it is still relevant today, particularly in our current political environment.

The Dispossessed is the first of six books in Le Guin’s Hainish Cycle. These novels are loosely connected by a people called the Hainish, who colonized earth and other planets hundreds of thousands of years ago. The Left Hand of Darkness is a Hainish novel along with Rocannon’s World and Planet of Exile.

Le Guin also wrote The Books of Earthsea, a series that is decidedly more fantasy than science fiction. It full of magical events and it is the story of a young wizard – a sort of precursor to Harry Potter. The first book in the series, A Wizard of Earthsea, is still a great read. The Earthsea collection of novels and short stories won the National Book Award, a Newbery Honor, the Nebula Award, and many other honors.

Vonda McIntyre passed away in 2019. She was a prolific writer of science fiction novels, novelizations, screenplays and short stories and she was an acclaimed teacher of writing.

She was well known for her Star Trek novels that include The Entropy Effect and Enterprise: The First Adventure. She also wrote the novelizations of Star Trek II: The Wrath of Khan, Star Trek III: The Search for Spock, and Star Trek IV: The Voyage Home.

Most readers agree that Dreamsnake is McIntyre’s greatest novel and it is based on her earlier novelette, Of Mist, and Grass, and Sand. It is about Snake, a female healer who possesses miraculous powers and a magical Dreamsnake.

My final recommendation is Kindred by Octavia Butler. Kindred has been acknowledged as the first widely known novel by a black, woman science fiction writer. It is a time travel story about Dana, a black woman, who in 1976 is abruptly transported back and forth, from her home in California to antebellum Maryland, where she encounters her ancestors and becomes enslaved. At

its core, Kindred is about white supremacy, slavery, and, ultimately, survival. Butler is also the author of Lilith’s Brood, a collection of three works: Dawn, Adulthood Rites, and Imago. These dystopian novels were previously published in one volume called Xenogenesis. The New York Times said that “The complete series is about an alien species that could save humanity after nuclear apocalypse—or destroy it”—from “one of science fiction’s finest writers.”