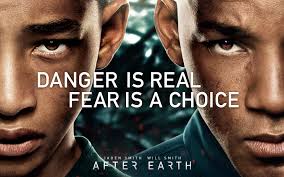 After Earth is a big-budget ($130 million) science-fiction adventure film starring Will Smith and his son Jayden as a father & son who crash-land on Earth a thousand years after man has abandoned it, and the adventure they have trying to escape the dangerous wild habitat the Earth has become. Smith himself came up with the basic story, and worked with screenwriter Gary Whitta to carry the idea further.  Due for release on May 31, 2013, it is expected to be a blockbuster.

Will Smith, acting as producer, hired director M. Night Shyamalan (Unbreakable, The Sixth Sense, Signs) for the film. This was the first time in twenty years that Shyamalan accepted a project based on someone else’s screenplay (the final screenplay was done by Stephen Gaghan). This would also be Shyamalan’s first digital film.

Science-fiction adventure stories come and go, but what makes After Earth a

unique film is the backstory. Normally, a film is scripted, filmed, and then if it is successful, writers are hired to create backstory, a “Bible” from which movie tie-ins, novels, short stories, and future scripts can draw material to make a unified vision of that world.  After Earth is the first film to flesh out its backstory before the scripting was even finished. Three expert writers were hired for that task: Peter David, Robert Greenberger, and Michael Jan Friedman, all of whom were well-versed in writing not only successful science-fiction and comics, but media tie-ins as well. All three collaborated in creating the “universe” in which the story takes place, the what, why, where, when and how, working on set with Smith, Shyamalan, and the scriptwriters to make the story as cohesive and believable as possible.

As told to me by Bob Greenberger, the three authors worked from the original Whitta script, taking tiny open references and creating minute details that would answer any questions the production team might have as to what cataclysms sent man from Earth, why Nova Prime, and what happened in the intervening years. Over a period of two years, this background encyclopedia grew to more than four hundred pages! If you’ve seen anything about the film in print, on the internet, or in film references, you can pretty much guarantee that information came from their work.

Of course, such detail and planning spawns stories on its own. Several novels centering around the movie are poised for release: After Earth, the novelization of the

With a top-notch cast and writing crew like that, how can After Earth be anything but a hit? Check out these other books by these great authors, (or meet them in person at the Shoreleave Science Fiction Convention in Baltimore this August).

Books are beneficial!
New TV and Feature Film dvds /blu-rays headed to the shelves just in time for weekend viewing!
Another library baby in the making! Any day now…
Teen volunteers Bennett (milkshake) and Julia (soup) took our food challenges and earned community service hours for doing it. Julia even shared her recipe with us! Every month we have a bunch of new challenges on our Event Calendar which count as community service time, check it out!
We’re going mad for science in July! Each Tuesday in July we’ll be doing a different interactive, hands-on science experience on Zoom with Mad Science. Kids in grades 2-6 can register for any of the virtual workshops and then come into the library to pick up the science kit to go with it. Supplies are limited, early signup is recommended!
New romance and cozy mystery paperbacks ready for checkout. Place requests through our catalog at cheshirelibrary.org and we’ll let you know when they’re ready for you to pick up!
Self-serve holds are back! We’ve moved the Holds Shelf from behind the Checkout Desk to a self-serve location by the front windows. Items are filed by the first four letters of your last name and the last four digits of your library card. DVDs and CDs are filed separately at the end.
Hope today is a good day!
Happy Pride Month! Check out our book display in the Children’s Room.