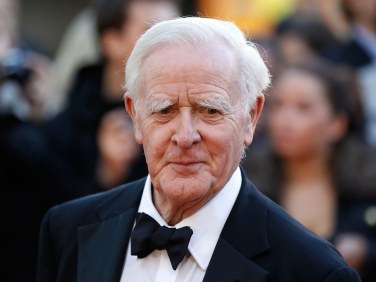 The other year, in preparation for a novel I hoped would have more intrigue and action than I was used to writing, I decided to break with my comfort zone and read a few spy novels to deconstruct the genre and see how the action was set up and paced. I’d read a James Bond novel once and was less than impressed; the movies I loved so much were horribly dull novels, and the book-Bond looked much more like Truman Capote than any pretty-boy actor.

I didn’t want to waste time, so I Googled “best spy novels”, and one of the top two on almost every list was John LeCarré’s 1974 novel Tinker, Tailor, Soldier, Spy, so that was the one I read first.

The lists were right. The book was brilliant, and I couldn’t put it down. After that I 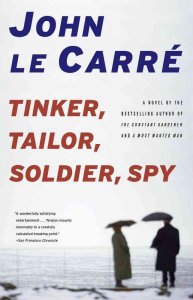 rushed out to watch the 2012 BBC film version, an incredible cast including Toby Jones, Gary Oldman, Benedict Cumberbatch, John Hurt, Tom Hardy, and more – which was still excellent, though some people prefer the 1979 mini-series adaption with Alec Guinness (that’s Obi Wan Kenobi to some of you). The strangest part was that, while reading the book, I had already cast Toby Jones in one of the roles in my head  –  but as Peter Guillam, though, not Percy Alleline as he was in the film. 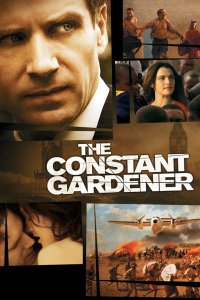 Why so good? Well, see – like Ian Fleming, John LeCarré (real name: David Cornwell; spies aren’t allowed to use their real names to publish novels) was an actual British spy in World War II, so he knows the ins and outs and tiny little details of how the game is played, layers upon layers of secrets and trades and double-dealings. He’s lived it first hand, and that makes all the believable difference. He began writing novels in 1961 (Call for the Dead), but it wasn’t until his third novel in 1963, The Spy Who Came In From the Cold, that he hit the best-seller list and wound up quitting MI6 (the British Secret Intelligence Service) to pursue writing full time.

While all of us sit here and think, why would you quit being an awesome spy to write books? 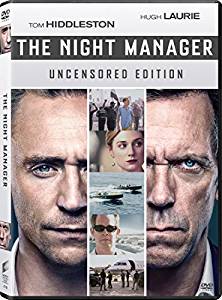 But LeCarré certainly is good at it, with more than 24 novels to his name, almost all of them best-sellers. Several have been made into successful film adaptions, including The Constant Gardener (2005), starring Ralph Fiennes and Rachel Weisz, The Spy Who Came in From the Cold (1965) starring Richard Burton, and the recent delicious adaption of The Night Manager (2016), starring Tom Hiddleston and Hugh Laurie, a book that reads more like a James Bond adaption than a Bond novel does.

Unable to sit still in retirement, LeCarré, now 86, has pumped out yet another novel last year, A Legacy of Spies, a conclusion of sorts for George Smiley’s people, his ex-agent who keeps coming back. Pulling his best-loved characters from so many of his novels, LeCarré manages to weave them together with new characters in present-day, finding new depths and bringing new truths to light, even after 50 years. LeCarré shows that time has not diminished him nor his characters, and if you think you know how it will end, like all of his works, it’s pretty well guaranteed you don’t. 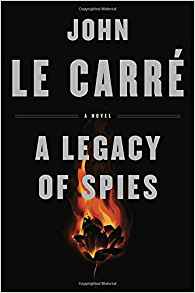 Give le Carré a try. If you like mystery, espionage, intrigue, and unraveling puzzles with characters who won’t let you go, then you’ll love his work. If you haven’t tried him, he’s a wonderful place to begin to explore the genre. For modern novels, he’s rather clean, without a lot of graphic violence or sex or language, perhaps making the stories even more remarkable. Start with Legacy of Spies and work backward, or start at the beginning and work forward. If you prefer to watch rather than read, there are more than ten films, five television adaptions, and four radio plays to keep you entertained. You’ll be so glad you did.

Did you know? Cheshire Library has passes to 14 different local museums, zoos, and parks? These passes are available to Cheshire residents on a walk-in basis (no reserves), and go out for 3 business days. Take a summer adventure with one of our Museum Passes! Visit cheshirelibrary.org/museum-passes to see the full list of passes available.
New middle-grade fiction on our shelves! See something you like? Place a request through our online catalog and we’ll let you know when it’s ready to pick up, it’s as easy as that!
Have you signed up for our Summer Adventure program yet? Kids and adults of all ages can sign up online or in-person at the library. Get a cool drawstring backpack when you sign up (while supplies last, claim yours quickly before they’re all gone!).
See what's new this week at the Cheshire Public Library at:
Pictures from our Pete the Cat music program! A groovy time was had by all!
Smile and Look Pretty by Amanda Pellegrino is our pick for today’s #bookfacefriday.
We had a very special guest from Country Quilt Llama Farm yesterday!
Unfortunately, the weather is not favorable for tonight’s outdoor concert. ☹️
New kids’ nonfiction titles in the Children’s Room!