Think about all the moments in your life that have been made easier by the person scheduling an appointment, making phone calls, ordering and managing the supplies, and otherwise making the world go round. Not just the people that do these things for you, or where you might work, but the people that do these things at the companies you do business with. Salespeople, service people, medical professionals, teachers, and so on could get very little done without the wonderful people that do everything in their power to make things run smoothly and frankly make it all look easy.

In honor of these hard working, and generally under-appreciated, people I have gathered up some fiction about the people that have worked as administrative professionals. Included are novels where assistants of different varieties face more work and trouble than anyone should, and still handle it all with style.

Chore Whore: Adventures of a Celebrity Personal Assistant by Heather H. Howard
Reaching her breaking point after being abused by more than twenty celebrities in her work as a professional Hollywood assistant, Corki Brown is dismayed to learn that ending her career is proving more difficult than anticipated.

A small-town girl fresh out of an Ivy League college lands a job at a prestigious fashion magazine, but wonders if the glamorous perks are worth working for the editor from hell.

The Second Assistant: a Tale From the Bottom of the Hollywood Ladder by Clare Naylor and Mimi Hare
A former congressional intern who takes a job as second assistant at The Agency, a powerful Hollywood talent agency, Elizabeth Miller never expected to have to cope with the trials, tribulations, and dirty dealings of the film world, from a Machiavellian assistant and company power struggle to a lecherous producer and ritalin-snorting boss.

Off the Menu by Stacey Ballis
Alana, the culinary assistant to a Chicago celebrity chef, discovers Southern hospitality after an accidental online connection to a Tennessee native and must decide on her priorities in life.

Rules of Civility by Amor Towles 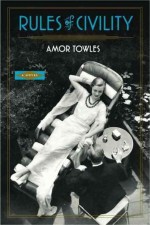 A chance encounter with a handsome banker in a Greenwich Village jazz bar on New Year’s Eve 1938 catapults witty Wall Street secretary Katey Kontent into the upper echelons of New York society, where she befriends a shy multi-millionaire, an Upper East Side ne’er-do-well, and a single-minded widow.

#Flashback to 2015, when Mr. Lucas was our Hanukkah Bear.
Cheshire Library's December art show features Meriden artist Christine Ivers. Her work will be on view in the lobby and the Mary Baldwin Room from December 1st through December 29th.
View from the Quiet Reading Area.
New Picture Books in the Children’s Room!
Too soon? Nope! Get in the holiday spirit with some Christmas-themed fiction, loads to choose from in our lobby display!
A tragic miscommunication.
This week the Cheshire Public Library has seven new bestsellers, two new movies, two new children's books, and ten other new books, including 14 that are available online. New items include "Go Tell the Bees That I Am Gone: A Novel", "The Judge's List: A Novel", and "The Dark Hours".
Lemon or chocolate, which pie is best?
We’re always thankful for our Friends of the Library group, they provide the library with so much every year! Did you know that EVERY PROGRAM that CPL runs is funded by the Friends? A lot of the furniture and equipment in the library is funded by them as well. The recent book sale put over $16,000 in the coffers- thanks to this amazing support organization and the community volunteers that helped make this book sale the second highest grossing sale ever!