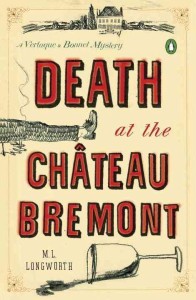 I recently stumbled on the Verlaque and Bonnet mysteries by M.L. Longworth. These delectable stories are set in Aix-en-Provence and begin with Death at the Château Bremont.

Death at the Château Bremont‘s description says “Antoine Verlaque, the handsome chief magistrate of Aix and his sometimes love interest, law professor Marine Bonnet, investigate the death of a local French nobleman who fell from the family Chateau in charming and historic Aix-en-Provence.”

Simple, non? Well, that one-sentence blurb does not even begin to cover the colorful world waiting for you within its pages. Not only do you get a good mystery, the descriptions of the town and countryside are a virtual tour of Provence. Longworth, who has lived there since 1997, obviously loves her adopted home.

And the food! As the characters eat and drink their way though the story, I often became more engrossed in their meals than in their sleuthing. They partake of fine wines and cheeses. They visit vineyards and cafes.  They meet friends for scrumptious dinners at small restaurants owned by skilled chefs. I was completely consumed by lifestyle envy.

The story is liberally sprinkled with passages such as this:

He tore open the cannele and bit into the soft inner cake made of rum and vanilla. Crusty and caramelized on the outside and soft and gooey on the inside, it was perfect.

The mystery floats in the background as the characters sit in cafes consuming fine French food and debating the merits of various wines. Verlaque often despairs of Marine. He is a gourmet and she will eat anything! Still, they enjoy an on-again, off-again love affair amid some meals that made me want to pack and move to France.

There are currently six books in this cozy mystery series. Warning: They are not only a good read, they will make you hungry!

Murder in the Rue Dumas

Death in the Vines

Murder on the Île Sordou

The Mystery of the Lost Cézanne

The Curse of La Fontaine