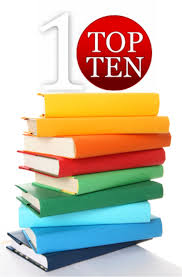 The editors of O, The Oprah Magazine have come up with their list of the top ten books of 2014.  How many did you read?

The Bone Clocks by David Mitchell – A vast, intricate novel that weaves six narratives and spans from 1984 to the 2030s about a secret war between a cult of soul-decanters and a small group of vigilantes called the Night Shift who try to take them down. An up-all-night story that fluentlymixes the super-natural, sci-fi, horror, social satire, and hearbreaking realism.

Thunderstruck & Other Stories by Elizabeth McCracken – A collection of stories navigates the fragile space between love and loneliness, including the title story in which a family finds their lives irrevocably changed by their teenage daughter’s risky behavior.

The Short & Tragic Life of Robert Peace by Jeff Hobbs – Presents the life of Robert Peace, an African American who became a brillant biochemistry student at Yale University, but after graduation lived as drug dealer and was brutally murdered at the age of thirty.

Station Eleven by Emily St. John Mandel – The sudden death of a Hollywood actor during a production of “King Lear” marks the beginning of the world’s dissolution in a story told at various past and future times from the perspectives of the actor and four of his associates.

The Empathy Exams by Leslie Jamison –  A collection of essays explores empathy, using topics ranging from street violence and incarceration to reality television and literary sentimentality to ask questions about people’s understanding of and relationships with others.

Boy, Snow, Bird by Helen Oyeyemi – A reimagining of the Snow White story set in the United States during the 1950s and 1960s.

Can’t We Talk About Something More Pleasant? by Roz Chast – A graphic memoir by a long-time New Yorker cartoonist celebrates the final years of her aging parents’ lives through four-color cartoons, family photos and documents that reflect the artist’s struggles with caregiver challenges.

Lucky Us by Amy Bloom – Forging a life together after being abandoned by their parents, half sisters Eva and Iris share decades in and out of the spotlight in golden-era Hollywood and mid-twentieth-century Long Island.

Being Mortal by Atul Gawande – A prominent surgeon argues against modern medical practices that extend life at the expense of quality of life while isolating the dying, outlining suggestions for freer, more fulfilling approaches to death that enable more dignified and comfortable choices.

Bad Feminist by Roxane Gay – A cultural examination of the ways in which the media influences self-perception, and discusses how society still needs to do better.