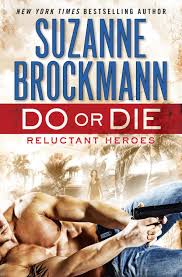 It is a spin-off of Ms Brockmann’s very popular Troubleshooters series and I must say, she takes this book to a whole new level.

The story centers around a supposedly dishonored Navy SEAL, Ian Dunn, who is in prison under suspicious circumstances, and his feisty lawyer, Phoebe Kruger, who is determined to get him out.  It’s a complicated story with multiple sub-plots, but told with clarity through Ms Brockmann’s exquisite writing and a cast of interesting, multi-dimensional characters.  The FBI wants Ian to lead a covert operation to rescue some kidnapped children from their ruthless father, but Ian has family issues that cause him to refuse.  Phoebe is determined to find out what Ian’s issues are so they can rescue the children.   Characters from the Troubleshooters series cross over to add support to this story.  There are great surprises when some of the characters’ full stories are finally revealed.  There are multiple love stories, but the book is more suspenseful than romantic.  It’s infused with humor and  the characters are written with such delicious detail, you can imagine yourself inside their heads.

The book is quite lengthy and I was hoping to skip parts here and there, but it was so well written, so entertaining, I just had to read every word!  Great characters were introduced in this book that are going to lead to an exciting series!