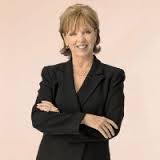 Nora Roberts was born in Silver Springs, Maryland, the youngest of five children.  She married young and worked briefly as a legal secretary – “the worst ever”.  After her two sons were born, she became a stay at home mom and immersed herself into gardening, canning, stitching and knitting.

Her road to writing began during the February blizzard of 1979.  Stranded at home with her two young sons and a lack of chocolate, she was looking for some non-child related entertainment.  Coming from a family of readers, she got a notebook and started writing down a story that was in her head.  She knew then that writing was the thing she was supposed to do.

In 1980, she heard of a new publisher, Silhouette, who was looking for American

In July 1985, Nora married her second husband – a local carpenter she hired to build some shelves for her home.  He went on to build many things in her home – including a solid marriage.

In the early years, she wrote when she could squeeze in the time between her sons’ school time and activities.  Now she spends 8 hours a day, every day, writing.  She has written over 200 books.  When she’s not writing, she tries to exercise in her pool or elliptical trainer and she is an avid gardener.

Nora’s husband, Bruce Wilder, owns a bookstore named Turn the Page Bookstore and Café in nearby Boonsboro, Maryland.  Directly across the street was an old, run down hotel which Nora and her husband bought in 2007. They began renovating it into a bed and breakfast called Inn BoonsBoro.  This was not an easy undertaking.  In February 2008, the Inn caught fire and was completely destroyed, and many buildings on the block were damaged. Undaunted, they started from scratch and in February 2009, the Inn opened to rave reviews.  This experience inspired The Inn BoonsBoro Trilogy.  The titles of this trilogy are:  The Next Always, The Last Boyfriend, The PerfectHope.

Her latest book as Nora Roberts is Whiskey Beach and as

J.D. Robb, the title is Calculated In Death and are available at the Cheshire Library.

Did you know - we have board games that you can check out for 2 weeks at a time? Come in and grab a game for the weekend!
Great panel discussion tonight, four crime fiction authors shared their processes for creating characters. Thanks to @sincconnecticut for putting this panel together.
Here’s what our Book Clubs are reading for October! We expanded our popular “Books Over Coffee” book club to include an evening meeting (which we’ve dubbed “Books Over Cocoa”) so that more people can participate. Our Murder by the Book Mystery Book Club meets online, the rest meet in person. Sign up through our online Event Calendar and join the fun!
More New Fiction on our shelves! See something that piques your interest? Place a request through our online catalog and we’ll let you know when it’s ready to check out - it’s so easy!
Has this ever happened to you? You’re stuck in a waiting room for longer than expected with nothing to read. Fear not! Your Cheshire Library card lets you bring the library with you - browse our digital collection and download an ebook, audiobook, or magazine in seconds - for FREE with the Libby app. Libraries to the rescue!
See what new and upcoming titles have been been added to our catalog this week at the Cheshire Public Library:
James found a great new book to explore this weekend. Apparently cats love that “new book smell” as much as people!
Celebrating Hispanic Heritage Month with today’s #bookface, The Book of Unknown Americans by Cristina Henríquez.
Are you ready for October? Our October Event Calendar just came out and it’s loaded with programs for Adults, Kids, & Teens. Sign up for a bunch!