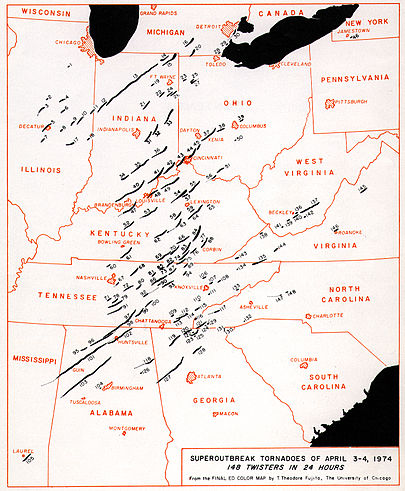 Our first exposure to tornadoes is often watching The Wizard of Oz as a child, though no one but Dorothy has ever reported being transported to a magical land beyond the rainbow. I was 9 when I read the Reader’s Digest account of the April 3-4, 1974 Night of 100 tornadoes, a horrific Super Outbreak of 148 confirmed tornadoes in 24 hours – more than 30 F4/F5’s – which devastated the town of Xenia, Ohio, among others. That kind of thing leaves an impression, even in a magazine.

April is in the middle of tornado “season,” which runs from March to June, when the biggest outbreaks of tornadoes are likely to occur. The United States has more tornadoes, and more violent tornadoes, than any other place in the world – killing an average of eighty people a year, despite our best efforts at early warning. Can they occur in other months? Of course they can. It all depends on the weather, and the weather, as we are aware, has been kind of wacky lately, from extreme drought in California to paralyzing snow and ice in Texas. 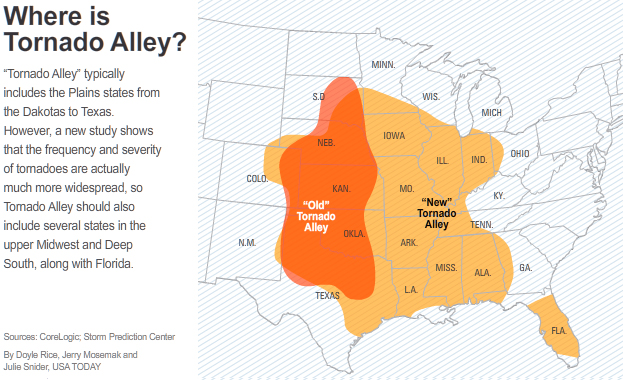 Why the US?  When we talk of “tornado alley,” we usually mean a massive stretch of flat land in the center of the country, from Colorado to Pennsylvania, and from Texas to the Canadian border. This is where the majority of tornadoes are born. Can they occur anywhere? Of course they can – CT has had memorable destructive tornadoes (such as the EF1 that wiped out Sleeping Giant in 2018) as well as Florida, Nevada, and Portland, Oregon. Pennsylvania holds the record for the only F-5 tornado east of the Appalachians – that’s winds of 300 mph.

Why do tornadoes form? Thunderstorms form when warm, moist air (such as from the Gulf) collides with cool dry air (such as comes down from Canada). When the two fronts meet, warm air rises up through the cold, creating storms. If the winds start to rotate in the process, a tornado is formed. Spring is when the warm air starts coming north from the Gulf of Mexico, colliding with the cold Canadian fronts, setting up a highway for storms until summer’s heat chases the cold air back north.

In modern times, with doppler radar, we know when a storm is likely to be powerful enough to cause a tornado (the Wallingford tornado of 1898 killed 34 people, but they had no warning system). If you’re faced with a severe storm, or a tornado warning, if the sky gets that sickly green, get to shelter. Go to a basement if you can, away from windows, under a staircase is a bonus. If you have no basement, go to a place away from windows – a large closet, or a bathroom – many people have survived in bathtubs. If you can, take shelter under a table or something sturdy. Cover yourself with a blanket, to avoid debris or flying glass. If you’re in a car, stop and get to shelter as fast as possible – don’t try to outrun a tornado; you can’t.  And no, hiding under a bridge isn’t safe – those 200 mph winds will blow you right out from under there. Please don’t leave your animals chained outside. They’re scared, too.

Whether you’re an armchair weather-watcher, or like reading about disasters, here’s a number of tornado-related stories and films you might enjoy – with one eye out the window (No, there has never been an actual Sharknado. Frogs and fish, but no sharks. Sorry).