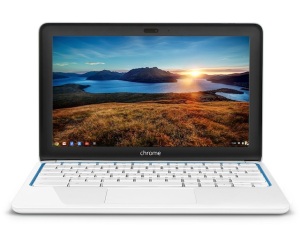 A Chromebook is a laptop of a different breed. Instead of Windows 10 or Mac OS X, Chromebooks run Google Chrome OS. Chromebooks are often criticized as “glorified web browsing machines” or disparaged for their lack of functionality. It is true that their functionality is limited, but I think the negative comments are unfair.

A Chromebook is designed to be used while connected to the internet, with most applications and documents living in the cloud. You can’t really “install” any applications. If you want to download iTunes, you’re out of luck. But you can listen to your music collection by moving it to the cloud in Google Play Music, a free alternative service. If you want to install Microsoft Office, you’re also out of luck. But you can use Microsoft Office Online, Microsoft’s new (and free!) cloud version of its popular office software. You can also use Google Docs and Slides.

And that is the theme of the Chromebook: if you think you can’t do something, you’re not thinking outside of the box, or outside of the OS! (That was a joke. You don’t have to laugh.)

On average, Chromebooks cost less than $200, and they have a boot time that’s well under 5 seconds. The Google Chrome operating system (OS) takes up about 4GB of space, compared to 11GB for Windows 10 and 15GB for OS X. This small footprint allows Chromebooks to affordably utilize lightning fast solid state drives (SSDs). They also have a long battery life.

So is a Chromebook right for you?

If you spend the majority of your computer time on the web, whether it’s surfing social media, reading the news, or using web-based services like Gmail and Google Docs, then Chrome OS would meet your needs just fine.

Take a moment and think about the programs locally installed on your computer, like word processors, email apps, image and video editing software. If these can be replaced with web-based alternatives, a Chromebook can work for you.

In fact, there’s a good chance a Chromebook will actually make things easier than what you’re used to with a traditional PC setup. Virus protection is built-in, and you never need to update your apps or your operating system. You never need to download drivers or “optimize” your PC to make it faster. You turn on your Chromebook, and 5 seconds later, you’re on the web.

Technology Help – Need device advice? Schedule a one-on-one lesson in the basics of computers, laptops, tablets, and eReaders. Call the library at 203-272-2245 to make an appointment or come to our monthly Drop-in Tech Help program.

I’ve noticed some patrons who come to library tech tutoring struggle to keep track of their passwords. They scribble them in notebooks, tape them to their laptops, jot them down on post-its, and before they know it, they’ve lost them. Sound familiar?

You’re really in trouble if you forget the password to your computer as one gentleman I recently worked with will tell you. His MacBook had no recovery partition, and we had to completely reinstall his entire computer—All for forgetting a little password!

Luckily, there are several companies offering solutions to the password dilemma. Two of my favorites are 1Password and LastPass.

1Password is an app that stores all of your passwords and automatically fills them in for you on websites. You can download it for Mac, Windows, iOS, Android, and as a browser extension for Safari, Chrome, and Firefox, so you’re never without your passwords everywhere you go. It even stores data for security questions, pin numbers, and anything else you might need.  All you need to remember is your one Master Password which will grant you access to your encrypted password database.

In the event your laptop stops working or you drop your iPhone in a toilet, you’re still covered. You can opt to backup your passwords to the cloud through DropBox or iCloud, or save it to a folder on an external backup drive. I use the DropBox backup, and it saved me when I lost a harddrive last year. All 184 passwords were still safe!

I really can’t say enough good things about 1Password. I use it every single day and it gives me immense peace of mind. If you’re struggling to remember and document your passwords in a reliable manner, definitely give 1Password or its similar competitor, LastPass, a try.

Technology Help – Need device advice? Schedule a one-on-one lesson in the basics of computers, laptops, tablets, and eReaders. Call the library at 203-272-2245 to make an appointment or come to our monthly Drop-in Tech Help program.

Did you ever wish you could navigate around a computer using only your keyboard? Build a website from soup to nuts? Recreate Twitter? …and learn it all for free?

You can, and the Library can help.

Learning how to code on your own is difficult because there are so many resources to choose from. It’s hard to know where to start. Luckily, several websites have compiled carefully curated lists of free resources, so you don’t have to.

The Odin Project (www.theodinproject.com) starts you off by teaching you how the web works, the basics of computer science, and navigating around the command line. From there, you’ll jump into Web Development 101, Ruby on Rails, HTML5 and CSS, and Javascript and jQuery. The free course concludes by giving advice on how to land a job as a web developer.

Bento (www.bento.io) is even more comprehensive. You’ll learn everything there is to know about computers, from web development, to version control, mobile app development, to every programming language or framework you can think of. You’ll even learn about data science. And the lessons are organized from basic to advanced to build upon what you learn.

The Library offers free high-speed wifi and a quiet place to study. If you don’t yet have a laptop, there’s still no excuse! You can start learning on one of our public computers.

Going camping and have no access to the internet for a while? Check out a book! We carry some great titles to get you started.

And last but not least…

The First 20 Hours: How to Learn Anything Fast by Josh Kaufman

The Cheshire Library has approximately 80 computers and lately it seems like they’re all acting like cranky two year olds!  So if you see an out of order sign, or a frustrated Librarian, please bear with us!  Luckily, we have a great Library Technology Coordinator to trouble shoot for us.  We also have a great selection of books about computers to help educate our patrons.  Do you want to know how to trouble shoot, program or just turn on a computer?  Would you like to know a little history, or benefits of computers?  Check out our computer section (.004-.006.78) downstairs in the Reference Department.

Here’s a small sample of what you can find:

Most Human Human: What Talking to Computers Teaches Us About What It Means to be Alive

Dogfight: how Apple and Google went to war and started a revolution

Is This Thing On? : a computer handbook for late bloomers, technophobes, and the kicking & screaming.

This is book three of the Life in Icicle Falls series.  I didn’t read the other two and do not feel like I needed to.  This book took me completely by surprise.  Most romances center around the angst of women trying to find true love.  This book centers around men!  It was very refreshing to read a story from the man’s perspective.

Jonathan Templar and his poker buddies are single, married, separated, height challenged, balding, overweight and geeky.  Not your typical romance heroes!  But they all have good hearts and no knowledge on how to get the love of their lives, or keep the loves of their lives.

The main character of this book is Jonathan who has been in love with his childhood neighbor his whole life.  She only sees him as her “good friend”.  Their 15 year high school reunion is coming up and he is determined to change from geeky, skinny, computer nerd, to stud-muffin he-man.  He’s also determined to learn how to talk to women and learn what they want.  His poker buddies also have their women challenges from Adam who thinks he’s in love with someone at work, to Kyle whose wife kicks him out for taking her for granted, to Vance who has known love and lost love and has quite the surprise!   Ms. Roberts deftly weaves their stories and other secondary characters around Jonathan’s.  Jonathan’s sister starts planting the seed of reading romance novels to learn about women.  They attend their local library’s book sale and Jonathan ends up buying a ton of romance novels.  He approaches reading them as if they were textbooks, highlighting passages and taking notes.  He ends up actually enjoying them!  His poker buddies accidentally come upon his new hobby and he hooks them into reading the romance novels too.  It is quite interesting, humorous and thoroughly engaging to watch these men transform.

This book will make you laugh, cry, and cheer for the underdog.  It is very well written, with great character development and scene setting.  You’ll fall in love with the Town of Icicle Falls and all its characters!