Do you know what a pangolin is? It’s an adorable little creature that is native to areas of Africa and Asia. It looks a little like an armadillo with similar keratin-based scales. They eat mainly ants and termites and roll up in a ball when they feel threatened. They are odd little guys, with tongues that can actually be longer than their body when full extended, which I suppose is extremely helpful when hunting termites. 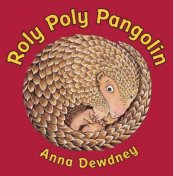 It is also one of the world’s must hunted and illegally trafficked animals on Earth. This one small animal current makes up 20 percent of the black market involving wildlife.  For more information on this oddly adorable creature take a look at Save Pangolins and the dedicated page on the World Wildlife Federation website.  You can also see some children’s books that include the creatures like Roly Poly Pangolin by Anna Dewdney and What on Earth is a Pangolin? by Edward R. Ricciuti.

The third Friday in February has been named World Pangolin Day to help raise awareness and conservation efforts of this endangered animal. This year it falls on February 18th. People are encouraged to recognize the day by sharing information about the pangolin and to help raise awareness about the danger the entire species is in. I think that is a wonderful idea, but we can take it a step further by learning more about a variety of threatened animals.

Sadly, there are many animals out there that are endangered or threatened that people are unaware of, unless they go looking for the information or stumble across it accidentally. That is how I found out about the pangolin. This in turn made me think about the number of animals and insects that make their way on to the endangered or extinct list every year and what can be done to stop (or at least slow) the process.

Thankfully, more and more information is available about animals at risk, and what we can do to help. This is particularly true with children’s books. There are several publishers making an effort to raise interest and awareness. National Geographic has an entire series of books about making a mission of protecting at risk areas. Thus far we have the books: Mission: Tiger Rescue, Mission: Wolf Rescue, Mission: Elephant Rescue, Mission: Sea Turtle Rescue, Mission: Polar Bear Rescue , Mission: Shark Rescue, Mission: Panda Rescue, and Mission: Lion Rescue.

While there are many more animals at risk out there, these books are a great way to dive into the information and get kids interested in helping animals, both in our backyard and miles away.

When biography and nonfiction book reports are assigned in school, there is one series that most middle grade readers go to first. Most will head straight for the Who Was biographies and the What Was and Where Is nonfiction series. These books cut straight to the important facts about the subject matter, while making the reading both fun and interesting. In fact, these books are so popular that it is hard to keep them on the shelf even when there are no school projects looming. To see just how few of these popular books actually are in the library right now, check out the small wooden stand outside the Teens Room.

This series is published by Penguin, and covers an extensive list of people, places, and events that are important historically or are currently relevant in pop culture. The books are easily recognizable by the caricature style drawing of biography subjects and bold cartoon work of all their covers.  There are also illustrations throughout the books and extra bits of information that make the reading more fun. For big fans of the series Penguin has a website where readers can keep track of which books they have read and test their knowledge.

There is a book club here at the library that meets once a month and focuses on the Who Was series. About a month before each meeting, a librarian will select a book from the series for everyone to read. At the meeting, readers chat about what they discovered in the book and do one or more fun activities inspired by that person’s life. For more info on when the group is meeting check out our events calendar.

Here is a small sampling of the wide variety of people, places, and events this series explores; Who is Jane Goodall? by Roberta Edwards, What is the World Series? by Gail Herman, What was the Battle of Gettysburg? by Jim O’Connor, Who was Dr. Seuss? by Janet Pascal, What was Hurricane Katrina? by Robin Koontz, Who was Betsy Ross? by James Buckley, Where is Mount Rushmore? by True Kelley, Who was Frederick Douglass? by April Jones, What is the Panama Canal? by Janet B. Pascal, Who is Stan Lee? by Geoff Edgers, What was the March on Washington? by Kathleen Krull, and Where is the Great Wall? by Patricia Brennan Demuth.

Do you have a children begging for a new pet, or one that needs to learn a little bit more about the responsibility that comes with the joys of having a pet? Perhaps your youngster just loves all things cute and pet-like and would like to learn a little bit more about them, including some history and wacky facts. Well, which ever inspires you and your child to search for non fiction books about pets, here are some books that you can enjoy together.

1.Presidential Pets: the Weird, Wacky, Little, Big, Scary, Strange Animals that have Lived in the White House by Julia Moberg

2. Pets in America: a History by Katherine C. Grier

3. Oh the Pets You Can Get!: All About our Animal Friends by Tish Rabe

4. Adopting Pets: How to Choose Your New Best Friend by Bill Gutman

6. The Royal Treatment: a Natural Approach to Wildly Healthy Pets by Barbara Royal, with Anastasia Royal

10. Why Rabbits Eat Poop and other Gross Facts about Pets by Jody Sullivan Rake

Looking for even more pet fun? Here are a few more books that might fit the bill; My First Guinea Pig and Other Small Pets by Linda Bozzo, Love Your Hamster by Judith Heneghan, Orangutans are Ticklish: fun facts from an Animal Photographer by Steve Grubman with Jill Davis, Do Fishes Get Thirsty? questions answered by Dr. Les Kaufman and staff of the New England Aquarium, How Dogs Really Work!  by Alan Snow, Silkies and other Guinea Pigs, My First Pets Board Book, Safety: with Pets illustrated by Sue Wilkinson, When a Pet Dies by Fred Rogers,  or May I Pet Your Dog?: the How-to Guide for Kids Meeting Dogs (and Dogs Meeting Kids) by Stephanie Calmenson.

Is there a young woman in your life that is excited by science or math, or perhaps obsessed with a particular field? Well my six year old daughter is currently planning on being a scientist that studies and cares for wild animals. Meanwhile my eight year old son is loving a special science class that lets him try a number of science experiments each week. To encourage both in all their interests I offer books, movies, and stories about people in those fields. Like many parents I find it frustrating that I have to search a little harder to find women pursuing the Sciences.

Here are a selection of children’s books about female pioneers and contributors to the fields of math and science. Hopefully they will help keep interested girls and young women interested in the fields, and perhaps get a few new interested parties.

Girls Think of Everything: Stories of Ingenious Inventions by Women by Catherine Thimmesh

A fascinating collection celebrates the clever and

creative inventions of women from candles, helmets, and baby carriers to cancer-fighting drugs and details their fierce determination to overcome many hurdles to make their dreams come true.

Women Astronomers: Reaching for the Stars by Mabel Armstrong
Presents information about the achievements of women in the field of astronomy throughout history, from women astronomers in the ancient and medieval world to prominent women in the

Life in the Ocean: the Story of Oceanographer Sylvia Earle by Claire A. Nivola
A picture book biography tells the story of Sylvia Earle’s growing passion for the wonders of the sea and how her ocean exploration and advocacy have made her known around the world.
Temple Grandin: How the Girl Who Loved Cows Embraced Autism and Changed the World by Sy Montgomery

An authorized portrait about Grandin’s life with autism and her groundbreaking work as a scientist and designer of cruelty-free livestock facilities describes how she overcame key disabilities through education and the support of her mother.
Amelia to Zora: Twenty-six Women Who Changed the World by Cynthia Chin-Lee
Profiles the extraordinary lives of twenty-six women who, through their acts and deeds, helped shape and change the world during their lifetime, including pilot Amelia Earhart and anthropologist Zora Neal Hurston.

With the political ads practically inescapable lately and midterm elections happening today, it is a perfect time to talk about voting with our children. Introducing the history, responsibilities, reasoning and ideals behind voting, and maybe a few laughs along the way, can turn the political ad season into a more enjoyable prospect for readers of all ages. I have broken the subject into two short lists, non fiction books and fiction.

1.How Do We Elect Our Leaders by Willian David Thomas

4.See How They Run: Campaign Dreams, Election Schemes, and the Race to the White House by Susan E. Goodman

5. If I Ran for President by Catherine Stier

More nonfiction books that are solid resources in understanding the political process and the history behind it include: Eyewitness Vote by Phillip Steele, Getting Elected: a Look at Running for Office by Robin Nelson and Sandy Donovan, Heart on Fire: Susan B. Anthony Votes for President by Ann Malaspina, Rightfully Ours: How Women Won the Vote, 21 Activities by Kerrie Logan Hollihan, So You Want to be president? by Judith St. George, The Taxing Case of the Cows; A True Story About Suffrage by Iris van Rynbach and Pegi Deitz Shea, Running for Public Office by Sarah De Capua, Vote! by Eileen Christelow, You Want Women to Vote, Lizzie Stanton? by Jean Fritz, A Kid’s Guide to the Voting Process by Tammy Gagne, and America Votes: How our President is Elected by Linda Granfield.

1. Grace for President by Kelly DiPucchio

2. The Kid Who Ran for President by Dan Gutman

3. Fake Mustache: or, how Jodie O’Rodeo and Her Wonder Horse (and Some Nerdy Kid) Saved the U.S. Presidential Election from a Mad Genius Criminal Mastermind by Tom Angleberger

4. Vote: the Theory, Practice, and Destructive Properties of Politics by Gary Paulsen

More stories about elections and the political process include: Election Day by Margaret McNamara,
President of the Whole Fifth Grade by Sherri Winston, Vote for Larry by Janet Tashjian (YA), Bad Kitty for President by Nick Bruel,Vote 4 Amelia by Marissa Moss, Pioneer Summer by Deborah Hopkinson, The Case of the Crooked Campaign by Lewis B. Montgomery, Otto Runs for President by Rosemary Wells, The Red, White, and Blue Crew by Lisa Mullarkey, The Hope Chest by Karen Schwabach, Babymouse for President by Jennifer L. Holm & Matthew Holm, Duck for President by Doreen Cronin,and Vote for Me! by Ben Clanton.