I love mysteries that immerse the reader in another culture, so here is a short (won’t burden you with 80!) list of some of my favorites, all written by authors with a gift for conveying a strong sense of place. There is no Nordic noir on my list.  A dead body or two and a certain amount of violence are inevitable in all but the coziest of mysteries, but the Scandinavians tend to take it a little far for my taste. Plus I prefer that the majority of the characters in the books I read be people I would enjoy spending time with!  So make yourself a nice cup of tea and curl up with any one of these for a satisfying few hours of reading.

Set in rural South Africa, Recipe for Love and Murder is the first in a series featuring Tannie Maria, a middle-aged widow who loves both to cook and eat and also writes a recipe and advice column for the Klein Karoo Gazette.  While assisting other people with their problems, Tannie Maria is forced to deal with her own–and with a murder to boot. Recipes included! The second novel in the series, The Satanic Mechanic, is due out at the end of March 2017.

Set in the colorful, crowded  metropolis of Delhi, this humorous series features the endearingly idiosyncratic detective Vish Puri (aka Chubby for reasons that will be obvious), India’s Most Private Investigator, and a boisterous cast of supporting characters including Puri’s irrepressible Mummi-ji and his operatives Tubelight, Facecream and Handbrake. Warning:  Do not read these books on an empty stomach, the descriptions of food are positively mouth-watering. No need to read in order.

Venice is the setting for this best-selling series, which has been running for 25 years and captures the beauty, character and seamy underbelly of  life in this glorious city.  Brunetti is a good and intelligent man working to keep crime and injustice at bay in his beloved Venice.  You read these books as much for his musings and observations about daily life, his beloved family, politics and government as you do for the mysteries. The books are also celebrated for their mouth-watering descriptions of the food,  so much so that Donna Leon co-wrote a cookbook featuring some of the fabulous Venetian recipes referenced in her novels.  For long-time fans, reading the latest Donna Leon book is like a visit with old friends. Pick up any one in the series and start reading!

Set in Quebec, these books feature one of the most admirable men to ever command a police force. Or pretty much anything else.  Multilayered plots, a large and richly described cast of characters and lyrical writing characterize this series which is made even stronger by its incorporation of the complexities of bi-lingual and bi-cultural Quebec.  As one reviewer said, “few writers in any genre can match Penny’s ability to combine heartbreak and hope in the same scene.” Still Life is the first in the series of 12 books, which is best read in order.

The Highland Gazette Mystery Series by A. D. Scott.

Set in the northern Scottish Highlands in the 1950s, this series about a mystery-solving newspaper staff in a small town captures the changing world of post-war Scotland.  This series has everything I like–richly drawn characters, complicated relationships and well-developed backstories in a setting both beautiful and bleak.  Read this fine series in order–the first one is A Small Death in the Great Glen.  There are 6 books in all and the author is working on the seventh.  As a bonus, you will meet members of the Highland Travelers, an indigenous group similar to the Romani in Europe.

A small village in the Dordogne region of south-central France is the setting for this series, featuring Benoit “Bruno” Courreges, a soldier-turned-policeman who would rather tend his garden or whip up a gourmet meal than use his gun or arrest a suspect.  Part of the pleasure of these richly satisfying mysteries is the contrast between the traditional rhythms of life in a French village and the terrors of the modern world.  You may miss a few details if you read this series out of order, but it will not dampen your pleasure in the slightest.

Emily Dickinson said it best:  “There is no Frigate like a Book To take us Lands away…”

For most gardeners, there is no better season than spring. After a long winter, we forget about previous garden disasters (like those darn deer that ate their way through last summer’s flower beds…) and look forward to what will surely be our most fabulous garden ever!  As I do every year, I spent part of last winter looking through gardening books and catalogs and planning improvements to my home landscape.  One of the many wonderful aspects of working at a library is easy access to all of the best books on any subject, including lots of garden and landscape books.  Here are some of my favorites from the last couple of years.

Coffee for roses : …and 70 other misleading myths about backyard gardening  Garden “myth-busting” done with wit and style.  Save yourself time and money–one of the tips I picked up from this book will save me both.

The Know Maintenance Perennial Garden  This simplified approach to perennial gardening uses hardy, attractive plants grown on a 10×14 foot grid. Each of the 62 garden plans combines complementary plants that thrive together and grow as a community and are designed for easy maintenance, the goal of most home gardeners. Even if you don’t switch to this system, you will find some good ideas.

Landscaping Ideas That Work.  Your yard should be an extension of your home and this terrific book covers front, back, and side yards and provides strategies for combining elements and creating spaces that work with any home. Some great before and after photos.

Lawn gone! : low-maintenance, sustainable, attractive alternatives for your yard.  My husband and I have ongoing “discussions” about our too-large lawn.  Every year I drag books like this home in hopes that he will give up the turf war.  No luck yet, but I keep hoping!

The Shady Lady’s Guide to Northeast Shade Gardening.   This is a great book for those of us whose yards are graced with large shade trees.  The Shady Lady identifies best practices, best plants, and best information, specifically designed for the zones of the greater Northeast – and leaves out all the rest. Includes a large yet highly selective illustrated plant gallery that includes all the indispensable perennials, ferns, and bulbs.

Don’t forget magazines!  We get many home and garden magazines in paper and downloadable formats, including Better Homes and Gardens, Fine Gardening, Organic Gardening and more.

This year, in addition to my own gardens and a period herb garden I help maintain at the Thankful Arnold House Museum in Haddam, I am assisting with a garden project here at the Cheshire Public Library.  Cheshire Garden club member Anupa Simpatico has designed a low-maintenance garden with four-season appeal for the front of the library.  This project supports and promotes a healthy environment for birds and pollinating insects and carries out the Cheshire Garden Club’s mission of garden education, civic beautification and the preservation of wildlife.  Click here to see the plan and plant list. This project wouldn’t be possible without the support of the Friends of the Library, who are helping fund it with money donated in memory of Margaret Andersen, a long-time member of the Friends and an avid gardener. The Cheshire Town Beautification Committee and several anonymous donors have made  generous contributions towards the cost of the plants and shrubs.
The garden will be enjoyed by library visitors as well as countless people who pass by the front of the library  in vehicles and on foot. We are looking for volunteers to help plant and maintain the garden.  Please contact me at drutter@cheshirelibrary.org if you are interested in helping.

So what were the happiest years in the last century?  I was driving home on April Fool’s Day  listening, as always, to NPR when this fascinating segment aired on analyzing the use of emotional words in books over the last century. A bunch of researchers in England decided that it would be interesting to use a computer program to track the use of hundreds of “emotion” words  from millions of books published over the last 100 years and digitized by Google.  All kinds of books were included from novels to technical manuals.  (Who knew that technical manuals had emotional content!) The original idea was to see if certain words became more popular at certain times, but the researchers didn’t really expect much.  However, what they discovered surprised them.

Check it out for yourself!  Read (or listen to) the the rest of the article on the NPR Health Blog. 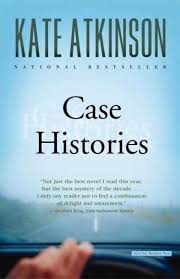 Last summer I was on a hiking trip in Scotland with 3 friends, all avid readers,  all fans of Kate Atkinson’s private investigator Jackson Brodie and all totally shocked that I had never read any of her books.  Well, you can bet I rectified that situation as soon as I got home.  After the first few pages of Case Histories I was hooked.  Nominally these books (there are four) are crime novels set in England and Scotland featuring the “tender curmudgeon and solver of mysteries” Jackson Brody.  These are not traditional mysteries–they are stories that feature fully realized and interesting characters,  vivid settings and complicated, somewhat meandering (though always compelling) plots.  In Atkinson’s skilled hands multiple story lines coalesce into a seamless narrative.  She is a wonderful writer and her books offer both marvelous entertainment and insight into the human condition.  If you prefer fast-moving mysteries with a linear plot, these are probably not for you.  But if you enjoy well-written character-driven fiction, these may be just the ticket.   And lest you think I am the only one pushing these books, Oprah recommended the 4th in the series, Started Early Took My Dog in her blog Mysteries Every Thinking Woman Should Read.

I would strongly recommend reading this series in order.

As a bonus, the first two books in the series have been made into BBC series.  The library will be ordering Case Histories, currently the only one available in DVD. Some titles are available in downloadable versions and all are available in audiobooks in our collection or through interlibrary loan.

Please let me know if you enjoyed them! 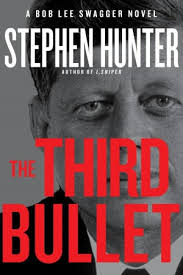