William Wallace is a Scots folk hero who, it is believed, was born around April of 1270. Wallace was a Knight who fought for Scottish independence from English rule, and was immortalized in the Oscar-winning film Braveheart, at least in name. Braveheart, while an entertaining drama, is about as factual on Scottish history as a tub of Cool Whip is the equivalent to Whipped Cream.

Braveheart’s soundtrack, while pleasant,  is also a modern composition, in the style of

Scottish music but not containing a single actual Scots tune. This begs a greater question: what’s the difference between Scottish Music and Irish Music? Aren’t they the same, but with bagpipes? The question might just get you decked for saying that.

Truth is, they are quite similar, passing traditions back and forth. If you listen to folk steeped in the music, there are subtle differences in rhythms, traditional Scots music tends to be in the key of A (there’s only so much you can do on a bagpipe), while the Irish prefer drums and the key of D. Scots tunes tend to be more “snappy,” while the Irish are more “driving” (the Clancy Brothers version of “Johnny I Hardly Knew Ye” all but jumps out and strangles you through the speakers). But, as in anything, the styles change song to song. Each will tell you theirs is better. 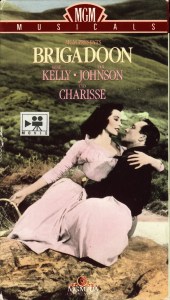 Irish music tends to be better known for several reasons. Far more people have emigrated from Ireland than Scotland, a country with the same population as Dallas-Fort Worth. The Irish tended to have more children than the Scots, so they beat them on sheer numbers as well. Many of Scotland’s great ballads get lumped in with English, but Scottish music is far from unknown. Amazing Grace, played on bagpipes though it’s an English hymn, is a funeral standard. Pipe bands are often a staple of parades. There is the Broadway play Brigadoon by Lerner and Loewe, complete with kilts and dancing. There’s a 1954 film version, but even for its day it’s rather awful. If any film needs a full Hollywood reboot, this one is 60 years overdue.

If Ancient Scottish Ballads aren’t your thing, and you think bagpipes sound like boiling

witches, there’s a much better chance you’ve enjoyed modern Scottish music. So many of the songs we hear today and think of as American or British acts are actually the work of Scots, since accents aren’t always that obvious in song. Perhaps the best known Son of Scotland would be Rod Stewart, the gravel-voiced rock singer who worked his way from rock to swing music. Annie Lennox of The Eurythmics is a Scottish lass. Sheena Easton, KT Tunstall, Mark Knopfler, now solo but formerly the lead singer of Dire Straits, David Byrne of The Talking Heads, the folk group The Corries, Average White Band, and current smooth hit-maker Paolo Nutini (yeah, that had me fooled, too – his father was Italian, his mother Scotch, and he was born in Scotland). Add in Ian Anderson (lead singer for Jethro Tull), Lulu (you might remember her for the theme from the Bond film “Man With the Golden Gun”), Big Country (a one-hit wonder in America), Gerry Rafferty, Simple Minds, and the Celtic folk group Capercaillie.

That’s a lot of tartan pride!

So whether you like traditional Celtic folk, the plaintive reels of a good piper, or feel like rocking out to Maggie May, sit back and raise a pint to old William Wallace, a patriot who died keeping his country and culture from being lumped with Ireland and England.