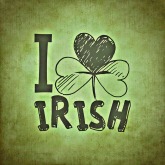 St. Patrick’s day is more than an excuse to wear green and pinch those who aren’t, it’s also a great time to read globally, rather than locally. There are a host of traditions that are celebrated each year around the holiday, several of which include:

If you’d prefer to keep the celebration more low key, go to your local library, pull up a chair, and tuck into some fantastic Irish titles this holiday.

1. If you’d like to start off with a bang, why not dive straight into Ulysses by James Joyce. As a staple of 20th century literature, Ulysses follows the events of a day in Dublin in 1904 and what happens to the characters Stephen Dedalus, Leopold Bloom, and his wife Molly. Ulysses is a slice of the day to day of human condition, and stands the test of time as a moment in writing that cannot be forgotten.

2. From the critically acclaimed author of The Boy in the Striped Pajamas, John Boyne, comes The Heart’s Invisible Furies . The novel tracks a man’s life in post-war Ireland and the main characters complicated relationship with Catholicism.

3. Described by The Irish Times as “arguably the most talented writer at work in Ireland today,” Lisa McInerney‘s debut novel The Glorious Heresies follows the fringe life of a city plagued by poverty and exploitation, where salvation still awaits in the most unexpected places. Following several main characters through a variety of criminal and difficult situations, McInerney captures hope in the underbelly of a small community.

4. John Banville‘s The Sea is an intimate look at the power of love, loss and the power of memory. This Booker Prize–winning novel follows Max Morden, an Irishman experiencing the loss of his wife and traveling back to his childhood seaside town. Banville does a fantastic job weaving together the history of Morden’s wife, both her life and death, into one powerful story.

5. Emma Donoghue, Dublin native and bestseller brings the story of mother and child to life in Room. Room is a tale at once shocking, riveting, exhilarating–a story of unconquerable love in harrowing circumstances, and of the diamond-hard bond between a mother and her child.

Looking for more? Check out these authors/titles you may have missed.

A Girl is a Half-formed Thing by Eimear McBride

PS, I Love You by Cecelia Ahern

I recently discovered the BBC America series Orphan Black, somewhat by accident. In my job as Social Media Coordinator at Cheshire Library, I spend a lot of time on various social media networks, where I’d see Orphan Black referenced regularly. The show has a very vocal online fandom, particularly on Twitter and Tumblr, and I guess this is a good example of social media effectively surpassing traditional advertising in getting the word out about something. After the fandom’s outpouring of joy when the show’s lead, Tatiana Maslany, was nominated (finally! they exclaimed) for an Emmy, I decided to see what all the fuss was about.

Luckily we own Seasons One, Two, and Three here at CPL, which allowed me to binge-watch my heart out, and guess what? They got me! It’s a really riveting show that, not being a huge sci-fi fan, I normally wouldn’t have thought to watch. I have joined the masses in my awe of Tatiana Maslany’s “heavy lifting” as an actress, playing multiple clones in each episode and making them all identifiable and unique.

Season Four won’t premiere until sometime in 2016;  where to get our clone fix in the meantime? Fear not, Clone Club, I’ve found a few books to fill the genetically-engineered void until then. Surprisingly, to me anyway, most of these are considered YA (young adult) books, but they stand up to adult reading.  So if you like fiction with a clone-y twist, might I suggest:

False Sight by Dan Krokos. Resolving to move past the disturbing truths of her clone origins to enjoy time with Peter and her other friends, Miranda is compelled to follow her genetically programmed instincts when a member of her team turns rogue and triggers a humanity-threatening war.

Project Cain by Geoffrey Girard. Jeff Jacobson learns that not only was he cloned from infamous serial killer Jeffrey Dahmer’s blood as part of a top-secret government experiment, but there are other clones like him and he is the only one who can track them down before it is too late.

Partials by Dan Wells. In a post-apocalyptic eastern seaboard ravaged by disease and war with a man made race of people called Partials, the chance at a future rests in the hands of Kira Walker, a sixteen-year-old medic in training

Falls the Shadow by Stefanie Gaither. When her sister Violet dies, Cate’s wealthy family brings home Violet’s clone who fits in perfectly until Cate uncovers something sinister about the cloning movement.  Murder, morality, and a slow-burning romance fill the pages of this futuristic thriller.

The House of the Scorpion by Nancy Farmer. This modern classic takes on an iron-fisted drug lord, clones bred for their organs, and what it means to be human. Winner of the National Book Award as well as Newbery and Printz Honors.

Never Let Me Go by Kazuo Ishiguro. Kathy grows up at a peculiar English boarding school called Hailsham, knowing that she and her classmates are “donors,” clones raised for organ harvesting. Kathy has deferred her fate by becoming a caregiver for dying clones, including her close childhood friends Ruth and Tommy. This award-winning novel straddles the YA and Adult Fiction genres, and takes the reader on a real emotional journey.

Every month there are more and more fantastic young adult books available. There also seem to be more book clubs starting every month. So, lets combine the two. Young adult book clubs can be made up of the supposed target for these books, adults that just love the books, or a combination of the two. A parent/child book club is a great way to start a valuable dialogue, and book clubs for just young adults can keep the love of reading going while adding a possibility of inciting friends of avid readers to join in

. Any way you look at it, a book club can be a wonderful thing, as long as the group can decide on the books they want to read and discuss. No matter the demographic of a book club, this is often the hardest part.

So, if you are trying to start a young adult book club, or looking to add some books to your list of possible reads, I have some suggestions for you.

If a Tree Falls at Lunch Period by Gennifer Choldenko

Kirsten and Walk, seventh-graders at an elite private school, alternate telling how race, wealth, weight, and other issues shape their relationships as they and other misfits stand up to a mean but influential classmate, even as they are uncovering a long-kept secret about themselves.

The Boy in the Striped Pajamas by John Boyne
Bored and lonely after his family moves from Berlin to a place called “Out-With” in 1942, Bruno, the son of a Nazi officer, befriends a boy in striped pajamas who lives behind a wire fence.

I Am J by Cris Beam
J, who feels like a boy mistakenly born as a girl, runs away from his best friend who has rejected him and the parents he thinks do not understand him when he finally decides that it is time to be who he really is.

Wintergirls by Laurie Halse Anderson
Lia and Cassie are best friends, wintergirls frozen in fragile bodies, competitors in a

deadly contest to see who can be the thinnest. But then Cassie suffers the ultimate loss-her life-and Lia is left behind, haunted by her friend’s memory and racked with guilt for not being able to help save her. In her most powerfully moving novel sinceSpeak, award-winning author Laurie Halse Anderson explores Lia’s struggle, her painful path to recovery, and her desperate attempts to hold on to the most important thing of all: hope.

A Monster Calls by Siobhan Dowd and Patrick Ness

Thirteen-year-old Conor awakens one night to find a monster outside his bedroom window, but not the one from the recurring nightmare that began when his mother became ill, but an ancient, wild creature that wants him to face truth and loss.

Other highly recommend books for young adult book clubs, serious discussion, or simply enjoying include: The Night Circus by Erin Morgenstern, Eleanor & Park by Rainbow Rowell, Sold by Patricia McCormick, Grave Mercy by R.L. LaFevers, Maggot Moon by Sally Gardner, London Calling by Edward Bloor, Out of The Easy by Ruta Sepetys, Here, There Be Dragons

by James A. Owen, The Story of Owen by E.K. Johnston, Wolf Mark by Joseph Bruchac, Just In Case by Meg Rosoff, The Possibilities of Sainthood by Donna Freitas,Code Name Verity by Elizabeth Wein, Raven Summer by David Almond, Before I Die by Jenny Downham, Once Was Lost  by Sara Zarr, The Dead Fathers Club by Matt Haig, Will Grayson, Will Grayson by John Green & David Levithan, The Chosen One by Carol Lynch Williams, The Book Thief by Markus Zusak, A Great and Terrible Beauty by Libba Bray,or Miss Peregrine’s Home for Peculiar Children by Ransom Riggs.