The first use of the word “robot” dates back to the 1920’s (robotnik or similar being a term for factory worker in many slavic languages), but the word “android,” meaning a miniature human-like automaton, is older, as far as 1863. A robot – a disembodied piece of machinery – does work for you – like a Roomba, or the useless rolling pest in the grocery store that spies on people who might steal things (at least Roomba can clean up a mess it finds, and doesn’t cost $35,000). An android looks like a human, moves like a human, interacts like a human (more or less), but inside is a machine.

That fact has led to a huge amount of introspection – how do we define Human? Is a self-aware, English-communicating Gorilla a person? What about our AI creations? When a computer becomes self-aware, does it have a soul? Is it “human”? At that point, is the use and ownership of an android slavery?  That question was battled in the Star Trek: The Next Generation episode “Measure of a Man,” where Starfleet claimed to own Data the android and control him like equipment, while the case was made he was sentient and free. The movie(s) Blade Runner also focused on that question.

I’m not a techie. Computers are great if they do what I need,  but I couldn’t care less about future tech, AI interfaces, androids, or streaming. Anyone who knows any science fiction knows you never trust AI or give it too much power. I like Data, I don’t love Data. C3PO is annoying. I hated Marvin the Paranoid Android. No matter how many times I watch Blade Runner, I think it’s one of the most boring movies ever (I still love The Six Million Dollar Man, but he was a bionic human, not android). So I was really, really surprised that I even picked up the book All Systems Red by Martha Wells, also known as The Murderbot Diaries #1. Not my kind of book. But from the first page, I could not put the book down. I read it while cooking. I read it while my kids were in the tub. I read it while walking. I had to finish it in one day. Thankfully, it’s a short novella, and that’s entirely possible.

Murderbot, as it calls itself (it has no gender. Murderbots are not built for sex; that’s a sexbot), is a Security Unit (SecUnit), a partly organic robot/android construct built to provide security detail for whoever rents or buys it. Of course, mostly what security entails is killing whatever might harm the persons it’s hired to protect, hence the term Murderbot. Murderbot, however, manages to hack its own governor module, releasing itself from control by the company who owns it.

This starts Murderbot on a soul-searching (or soul-developing?) quest to find out exactly who or what it is now, all while working hard not to let anyone realize it’s free, because an uncontrolled killing machine is a very, very dangerous thing (to quote Kyle Reese from Terminator, “That terminator is out there, it can’t be bargained with, it can’t be reasoned with, it doesn’t feel pity or remorse or fear, and it absolutely will not stop… EVER, until you are dead!”).  But Murderbot isn’t fond of killing. He’s fond of soap operas and TV serials (like The Rise and Fall of Sanctuary Moon). All he wants is to be left undisturbed to watch his shows while he tries to figure out the human race. Life never lets him, and he feels obligated (like the heroes in the soaps he watches) to help while trying to solve the mystery of who is trying to kill the people he was hired to protect.

Murderbot is sarcastic, droll, funny, depressed, almost autistic in his stilted approach to emotion and interaction with people. He’s a fast thinker and an opportunist. He says s**t a lot more than Data. He doesn’t want to be human, yet is fascinated by them and can’t stop studying them. And he makes mistakes, just like a human. The innovative – and logical – adaption/hijacking of computer systems has opened my eyes to issues I’ve never given a thought to, such as the power of drones. With all the issues currently happening via ransomware, spying, and breaches, and the mass-market and miniaturization of drones, maybe we should be thinking more along the lines of Murderbot, as our military is also controlled by computers, and nothing but nothing is hack-proof. People mistrusted the NYPD robodog so much they had to send it back.

I had to read the second book Artificial Condition (possibly my favorite, because of ART, Murderbot’s name for the “A*****e Research Transport” ship computer), whipped through the third, Rogue Protocol , flew through the fourth Exit Strategy, (also possibly my favorite), and am now reading the fifth, Network Effect. The sixth and current volume is Fugitive Telemetry, with three more commissioned by the publisher, and a TV version is in the works (please, please don’t mess it up!). All Systems Red has won the Nebula Award, the Hugo Award, the Alex Award, and the Locus Award. Yes, the stories are simple (good guy must take down bad guy) but the humanity and humanism throughout the series will keep you emotionally invested to the very end.

Pure enjoyment, with no other agenda. Murderbot is my favorite android ever.

Every year there’s some tech gadget that seems to be the “in” gift, whether it’s an iPod, a Kindle or cousin, or, with the prices continuing to fall, it could very well be an Amazon Echo, also known as Alexa – available for as little as $99.

What is an Echo? It’s an artificial intelligence billed as a virtual personal assistant, and overall it can do some pretty entertaining things. One thing to understand – an Amazon Echo Dot, and the Amazon Echo, are THE SAME THING. The difference (besides $50) is that the Echo comes with its own speakers; the Echo Dot has to use bluetooth technology to feed off a blue-tooth capable speaker you provide, 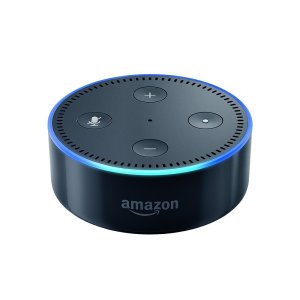 whether your phone or boombox or clock, etc. That’s it. So treat them interchangeably, because they are.

Inspired by the Enterprise computer on Star Trek and built on the Android platform, Echo sits in your house and by request can immediately tell you the weather forecast, the news, the time, the sports report, play games with you, set an alarm, play an audiobook, play a perfect mix of music as a personal radio, power smart devices like the Nest thermostat, stream podcasts, make you a list, provide recipes, find your phone, call an Uber, tune your guitar, order take-out, and even send messages and email to other Echos. There are currently more than 1500 downloadable apps to allow it to do quite an array of useful things for you, hands-free. The programmers have thought up just about any way an Echo could be abused – swear at it, and it will correct you. Ask it if the CIA is listening, it will give you a wise-crack answer. Ask it to Beam Me Up and it will give one of several replies. Ask it to do the fandango, and it will reply appropriately. 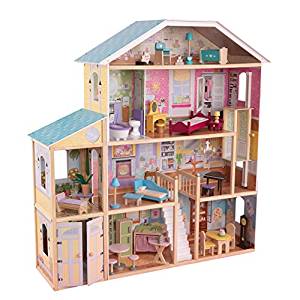 Of course, nothing is without controversy. Unless you hit mute, rendering it “deaf” and unable to function, the Alexa/Echo sits in your house listening 24/7 for its wake-up word (“Alexa, …”) and a command. Those commands are recorded so that the Echo “learns” what you ask most and can process your commands quicker. It learns how to interpret your personal pronunciation. Amazon swears it is not recording what happens around your house, only the commands that follow the word “Alexa.” Sometimes it will “hear” something on a TV that sounds like a command, and respond. There was an incident of a child asking Alexa for a dollhouse, and a $170 dollhouse was sent by Amazon (moral: don’t leave one-click ordering engaged).

In another incident, a woman asked Alexa to dial 911 in the middle of a domestic dispute; the police arrived in time to save her life. Problem is, Alexa isn’t supposed to do that. Not only is it not connected to any call system (unless it’s another Echo), but communication rules prevent it from being able to call out unless it’s also able to receive calls in. Nonetheless, somehow, somewhere, something in the home called 911, because in the 911 recording, the woman is screaming for Alexa to call 911. It remains a mystery. In my own case, we’ve had the Echo suddenly awake for no reason and give the news or weather or just “I didn’t hear that,” as if it forgot it was supposed to be seen and not heard unless spoken to. Just a little creepy.

If a slim possibility of wiretapping freaks you out, then simply hit the “mute” button when you don’t want the Echo “hearing,” effectively turning it off. Unmute it when you want to use it.

a phone, I think it’s silly to put regulations on any capable device from calling 911. A cellphone will call 911 without a paid plan; why can’t a virtual assistant? How many elderly fall while their help button is sitting on the bathroom sink? Having a voice-activated 911 in the home for a disabled or elderly person can be lifesaving. Period.

Still don’t like your commands being recorded? Go into your Amazon account and erase them. Is it possible to hack the Echo? Not easily – the entire system would have to be hacked. But as we know with hacking, nothing is impossible, so it’s best not to chain sensitive accounts to your Echo, and again, if you’re worried, turn the Echo off (mute) when not in planned use. Yes, you can unplug it, too, but then you have to wait a minute for it to reboot and get its bearings again.

In my family, 99.8% of the Alexa/Echo use is for a commercial-free personal radio, with great playlists from Rush to Raffi. By far, we under-utilize its capabilities. As a gadget it has a multitude of uses, especially for any physically disabled person or shut-in. Does it do anything you can’t do with a computer or a radio? No. But it’s easy to move from room to room or take with you if you go somewhere (with wifi. It must have wifi to work.) It’s easy enough for Aunt Betty to learn to use. If it’s for someone who is tech-savvy, they’ll discover a world of things they can do with it.

As far as sale-priced gadget gifts go, yeah, this one is probably worth it.

For more on Artificial Intelligence, check out these titles, and more:

Breakpoint: Why the Web Will Implode, Search will be Obsolete, and Everything Else You Need to Know abour Technology is in Your Brain by Jeff Stibel

Our Robots, Ourselves: Robotics and the Myths of Autonomy by David Mindell

Final Jeopardy: The Story of Watson, the Computer that Will Transform Our World by Stephen Baker

Thinking Machines: The Quest for Artificial Intelligence and Where It’s Taking Us Next by Luke Dormehl

Life 3.0: Being Human in the Age of Artificial Intelligence by Max Tegmark