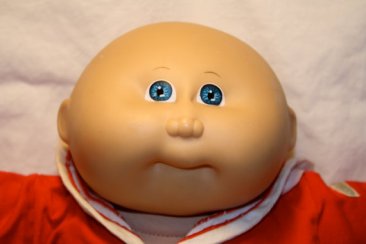 Icons come and icons go. Coca Cola survives, but Woolworth’s, the standard of the early 20th century, is now history. What’s popular today may not make the cut to the next generation – few kids today play with Cabbage Patch Dolls, despite the frenzied battles people had over them in the 1980’s, and all those people who sank thousands of dollars into Beanie Babies as investments now have … boxes of worthless stuffed toys.

Winnie the Pooh is one of those who made the grade. A.A. Milne (Alan Alexander) 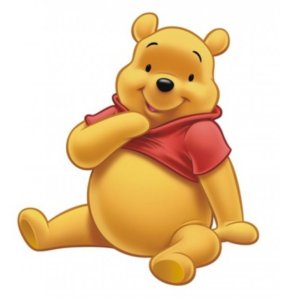 wrote first a book of children’s poems (When We Were Very Young), then a Christmas story, and finally, in 1926, a book of stories, Winnie the Pooh, based on his son Christopher Robin and his stuffed bear Edward. A sequel, The House at Pooh Corner, followed in 1928, as well as two books of poems. Filled with charming innocence after the bloodbath of World War I, bumbling, slow-witted but kind-hearted Pooh and his friends (Tigger, Eeyore, Piglet, and Kanga and Roo) hit a needy spot in a dejected population. By 1931, Winnie the Pooh was a $50-million business, the dream-deal of every author (and that was in the middle of a depression!).

Although Milne died of a stroke in 1956, Pooh continued to expand when the film rights, among others, were sold to Disney in 1961, and the first animated cartoon released in 1966, with Sterling Holloway’s voice becoming the standard for Pooh. Today, the marketing of Winnie the Pooh is worth as much as $6 billion dollars a year, the third most valuable franchise in the world, after Star Wars and Disney Princesses (both, not surprisingly, also Disney franchises, a company with more than 92 billion dollars in assets).

Within the last year, another expansion on the franchise has brought out two marvelous films not necessarily aimed at children but adults who once were children: Goodbye Christopher Robin, and Christopher Robin. 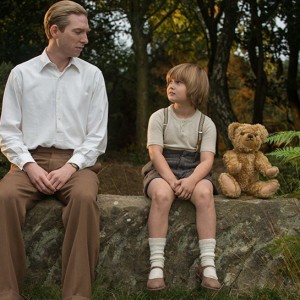 On August 3, Disney launched their Christopher Robin film (does someone leak news 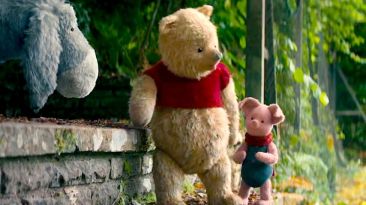 between studios? This type of inter-studio film wars has happened numerous times, most recently with Mirror, Mirror and Snow White and the Huntsman both released in 2012, and Disney’s 2016 Jungle Book with this October’s Warner Bros. coming release of Mowgli). In a plot fairly reminiscent of Hook (which was not a Disney creation), Christopher Robin is a grown-up who has lost his imagination, so enter CGI Pooh and friends to help him remember it. While the voices are so close to the cartoons you loved in the 60’s, somehow the CGI just doesn’t work as well. Kids will probably love it, grown-ups not so much, and not for lack of imagination.

Winnie the Pooh was voted an icon of England, but you can see the original Winnie and friends at their permanent home at the New York Public Library here in the United States (Roo was lost in an apple orchard in 1930). 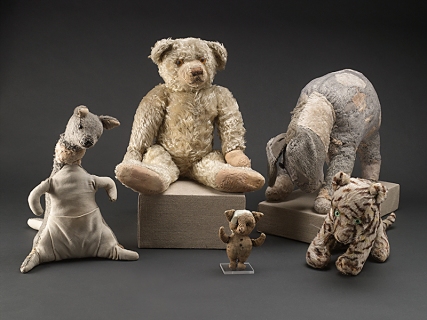 As the real Pooh turns 100 in 2021, he’s showing no signs of losing his status as a bear loved around the world. Pooh has been translated into more than 46 languages, including Latin, Mongolian, and Esperanto. If you have no child to share Winnie the Pooh with, try these “adult” Pooh books: 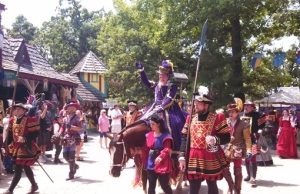 Fall is here again, and with it comes Fair season – Church Fairs, Grange Fairs, State Fairs, Harvest Festivals, and perhaps the most fun of all – The Renaissance Faire.
Renaissance Faires are  newer than you think. The first official “Renaissance Faire” traces back to Los Angeles in 1963, when a school teacher named Phyllis Patterson put one on for a weekend fundraiser for radio station KPFK, and more than 8,000 people showed up. A fall staple was born (because, let’s face it, NO ONE wants to be buried under that many yards of wool, satin, and leather in the middle of July).

Why the Renaissance? Why not Roman Bacchanalias with chariot races? Why not the 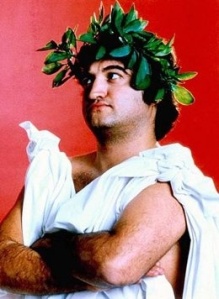 Dark Ages? Why not Pompeiian pageants? Celebrating the gruesome deaths of a city of people might be just a tad morbid. The Dark Ages were – well, Dark. We don’t know much about them, because following the fall of Rome civilization was illiterate, spread out, and little was going on beyond warfare and survival. And Rome? Rome certainly had a lot going for it, but not many speak Latin anymore, and togas, while simple and fun for frat parties, just don’t have the suave flair of swashbuckling boots, rapiers, and villains’ pointed beards and mustaches. The Renaissance has far more possibilities.

Rising up out of the depths of the Black Plague, the Renaissance means, literally, a rebirth. Disenchanted with a church that did not save them from the plague, men turned to science to keep them safe, resulting in great advancements in learning, science, art, music, and warfare. Stretching from 1300 to 1600, the Renaissance saw the rise of DaVinci, of Galileo, Columbus, Martin Luther, the printing press, Magellan, Henry VIII, William Harvey,  the advent of gunpowder, muskets, and the waning of armor and swords. Most Renaissance Faires throw in the likes of Robin Hood (earliest tales date to 1377), and sometimes eve 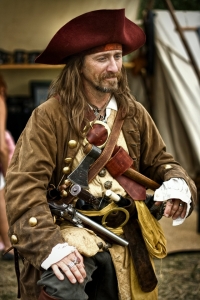 n King Arthur, who, although Malory’s history of Le Morte D’Artur is published in 1470, the story from which The Once and Future King is taken,  is believed to have lived, if he’s not merely legend, sometime between 600 and 800. Herein lie the tales of valor, not long before the Three Musketeers, the tales of actual pirates Barbossa and William Kyd, of Dutch corsairs and privateers, and let’s not forget Shakespeare (though Shakespeare’s plays, though written and performed around 1600, were often taken from history much older: King MacBeth actually lived in the 1000’s). That’s a lot of romanticized history to be able to play with, a lot of possibilities for actors to delve into. Hence Renaissance Faires are full of LARPers (live-action role players) and SCA (Society for Creative Anachronism, hard-core medieval recreationists) members running about. Your inner Dragon Master can run amok, and no one will ever know. 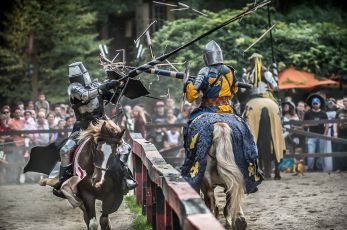 So pull on your hose, strap on your broadsword, lace your corset, and get ready for an imaginative adventure back in time, and if you’re not careful, you just might learn something. Faires can offer a diversity of activities such as Birds of Prey shows, sword forging, glass blowing, theater, jousting, live chess tournaments, musicians, and more, as well as authentic foods, drink, clothing, crafts, and entertainments.  Check out the Connecticut Renaissance Faire, or if you like a drive, try the larger ones like King Richard’s Faire in Massachusetts, or my favorite, The New York Renaissance Faire in Tuxedo, New York. They’re worth the trip!  For a more in-depth experience, check these great books out as well:

Sting (born Gordon Sumner) is one of those hold-overs from the last golden age of music.  His career took off as lead singer for the band The Police, whose pop singles such as “Don’t Stand So Close to Me” scored gold even when re-released. Since the break-up of The Police in 1986, Sting has had his share of solo chart-topping success with power albums such as Dream of the Blue Turtles, but I’m not sure his latest endeavor, The Last Ship, will do as well.

Don’t get me wrong – the album is lovely and showcases Sting’s wide range of talents in a heavy northern accent we didn’t hear during his Police years.  The songs – his first after a ten-year writing hiatus while he dealt with the deaths of his parents – are soft, almost melancholy, exploring the closing of the shipyards in the town he’d grown up in.  It’s a long, long way from “Roxanne” or “King of Pain.” Instead, we’re left with an album that vacillates between traditional-sounding folk tunes (the haunting title track, “The Last Ship,” which never seems to want to leave your head) and soft Sunday-brunch jazz (“August wind”).  If there’s a bad side to the album, it’s that it lacks the wider scope of variety we’ve come to expect from Sting as he has explored various types of music, from pop to rock to jazz to symphony.

If you love soft music, or ballads, or folk music, you’ll enjoy this album, The tunes are haunting, the lyrics thoughtful, with a presence so strong you feel as if you’re walking the streets through an old British-Isles sea town.  If you’re looking for chart-climbing pop singles, go back to Fields of Gold.