I’ll admit that I’m an arm chair traveler. I open a book and I’m instantly in another place. I love a story that really immerses the reader in the details of the setting: the water, the mountains, the sounds and smells. I’ve traveled the world via books.

Here are a few titles where the setting is an integral part of the story. So settle into  your favorite chair and escape…

The Rocks by Peters Nichols
Majorca, Spain
This story is set against dramatic Mediterranean Sea views and lush olive groves. What was the mysterious, catastrophic event that drove two honeymooners apart so absolutely in 1948 that they never spoke again despite living on the same island for sixty more years? And how did their history shape the Romeo and Juliet like romance of their (unrelated) children decades later? Centered around a popular seaside resort club and its community, this double love story  begins with a mystery, then moves backward in time, era by era, to unravel what really happened decades earlier. 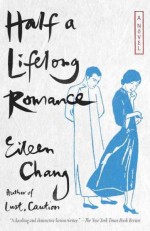 Half a Lifelong Romance by Eileen Chang ; translated by Karen S. Kingsbury
Shanghai, China
Shen Shijun, a young engineer, has fallen in love with his colleague, the beautiful Gu Manzhen. He is determined to resist his family’s efforts to match him with his wealthy cousin so that he can marry the woman he truly loves. But dark circumstance force the two young lovers apart. A glamorous, wrenching tale set against the glittering backdrop of an extraordinary city.

Bruno, Chief of Police by Martin Walker
Dordogne, France
Benoît Courrèges, aka Bruno, is a policeman in a small village in the South of France who loves the pleasures and slow rhythms of country life. He has a gun but never wears it; he has the power to arrest but never uses it. But then the murder of an elderly North African who fought in the French army changes all that. Now Bruno must balance his beloved routines—living in his restored shepherd’s cottage, shopping at the local market, drinking wine, strolling the countryside—with a politically delicate investigation.

The Shipping News by Annie Proulx
Newfoundland, Canada
Quoyle, a third-rate newspaper hack, is wrenched violently out of his workaday life when his two-timing wife dies. An aunt convinces Quoyle and his two emotionally disturbed daughters to return with her to the starkly beautiful coastal landscape of their ancestral home in Newfoundland. Here, on desolate Quoyle’s Point, in a house empty except for a few mementos of the family’s unsavory past, the battered members of three generations try to cobble up new lives.